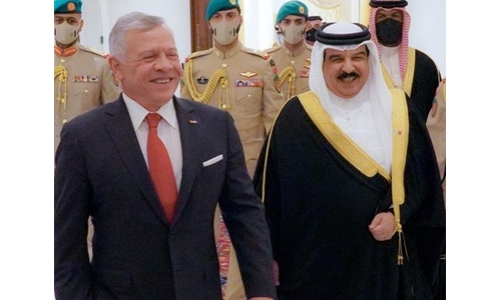 His Majesty King Hamad bin Isa Al Khalifa stressed the depth of the solid fraternal relations between Bahrain and Jordan and the advanced level of bilateral cooperation at various levels.

HM King Hamad and HM King Abdullah expressed satisfaction with the level of joint trade exchange, as well as with the advanced level reached by the economic and commercial relations between the two countries.

They discussed the latest developments in the Middle East, the region and the world, stressing the importance of coordination between the two countries, as well as the need for intensifying efforts to reach a just solution to the Palestinian cause.

They emphasised that peace is a strategic option to end the Palestinian-Israeli conflict in a just and comprehensive way, following the relevant international legitimacy’s resolutions and the Arab Peace Initiatives, in a way that would ensure the rights of the Palestinian people.

While discussing the latest Syrian developments, HM King Abdullah affirmed his country’s support for the efforts to preserve Syria’s sovereignty, stability, territorial integrity and unity of its people.

Support for Arab issues HM King Hamad commended the efforts of HM King Abdullah to support Arab issues, especially the Palestinian cause, as HM is the custodian of the holy sites in Jerusalem.

The two monarchs stressed the need to put an end to foreign interference in the region’s affairs, given their negative effects on regional security and stability.

They affirmed the importance of cooperation between the two kingdoms to strengthen the pillars of security and stability in the region, as well as to protect international maritime navigation in the Arabian Gulf waters from any threats that may affect the flow of global trade.

HM King Abdullah expressed thanks and appreciation to HM King Hamad for the gracious welcome and hospitality accorded to them, confirming the depth of the solid relations between the two kingdoms and their peoples.