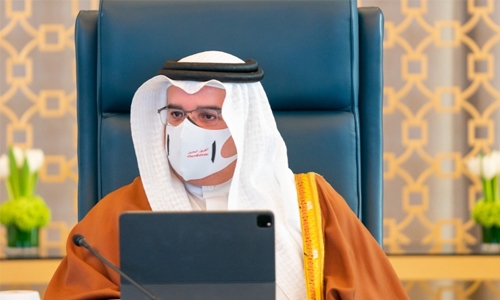 The Cabinet yesterday approved the dedication of March 25 as an annual day of celebration of Bahraini youth for their role in the Kingdom’s growth and development, based on a proposal by HH Shaikh Nasser bin Hamad Al Khalifa, Representative of HM the King for Humanitarian Works and Youth Affairs. It congratulated His Majesty on Bahrain’s success in hosting the third edition of the Bahrain International Trophy.

The Cabinet noted that international stables and owners attended the race, reflecting the Kingdom of Bahrain’s standing in the horse racing circuit.

It praised the efforts made by the Rashid Equestrian and Horse Racing Club’s High Committee, headed by its Chairman His Highness Shaikh Isa bin Salman bin Hamad Al Khalifa, in organising an event that showcases Bahrain’s efficiency in hosting world championships.

The Cabinet approved the following memorandums:

* A memorandum by the Ministerial Committee for Legal and Legislative Affairs regarding an MoU between Bahrain and the Government of the Bailiwick of Jersey regarding cooperation in the financial, digital, and cultural sectors.

* A memorandum by the Minister of Interior related to the digital transformation of services provided by the General Directorate of Traffic by adding several services to the e-government portal.

These include the issuance of a consent form for driving another individual’s car across the King Fahd Causeway.

As well as the launch of a digital driver’s license and vehicle ownership, which does not require the owner to carry a physical copy of each.

* A memorandum by the Ministerial Committee for Legal and Legislative Affairs regarding the government’s response to a proposal submitted by the Council of Representatives.