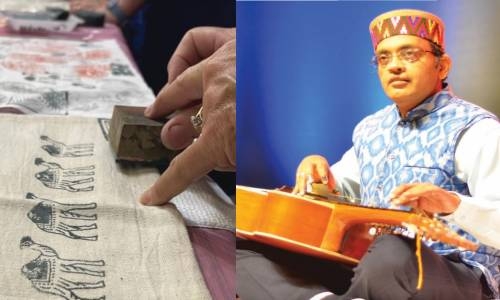 Today, Bab Al Bahrain will witness the launch of activities to celebrate the Golden Jubilee of diplomatic relations between the Kingdom of Bahrain and the Republic of India, at 6pm.

The Bahrain Authority for Culture and Antiquities (BACA) is organising a cultural programme that extends for a whole week in cooperation with the Indian Embassy in the Kingdom and includes activities ranging from the market, live musical performances, workshops and lectures.

The “Little India Market” returns to Manama near Bab Al Bahrain, where it is held daily until October 19, between 6pm and 9pm.

It contributes to the Indian community market and offers a variety of activities, where various Indian and Bahraini products, traditional foods, handicrafts are sold.

Bahraini and Indian artists will also provide cultural performances that reflect the strength of cultural ties between the various segments of society in the Kingdom, and form an attractive site for visitors and local residents alike.

The “Little India Market” also includes a “Made in Bahrain” store.

The concert comes as part of the 30th Bahrain International Music Festival.

Jaywant, accompanied by a group of musicians, will present the classical Indian music of North India on the Hawaiian guitar, a musical instrument that he started learning when he was eight years old.

The ceremony will be held today and tomorrow.

In addition, the Bahrain National Museum will host two lectures on the relations between Bahrain and India.

The first is to be held tomorrow at 7:00 pm and will be presented by speaker Bob Thacker, in which he will discuss the trade relations between Bahrain and India over the past two centuries.

The second will be held on October 17, at 7pm, and will be presented by Youssef Salah ElDin on the Bahrain-India bilateral relations, especially during the past five years.

The interactive activities will start on October 15 with a photography tour in the “Little India Market”, which is organised by BACA in cooperation with Photo Bahrain and Fujifilm.

On October 16, the Arts Centre will host two workshops on the art of hand block printing, a traditional Indian craft with roots dating back more than 800 years.

The participants will learn about the techniques of this craft and how to create their own designs and print them on different materials.

This workshop is supervised by the Kala Foundation for Artistic Design.

In the interest of the public’s safety and to follow the precautionary and preventive measures to limit the spread of the coronavirus (COVID-19), BACA notes that attendance at internal events is limited to those who have received the green shield, while volunteers and non-vaccinators can attend external activities within the allowed numbers that it determines.

The programme to celebrate the Golden Jubilee of diplomatic relations between Bahrain and India is held in cooperation with the Indian Embassy, in addition to the following cultural associations: Maharashtra Cultural, Bahrain Odia Samaja, Telugu Kala Samethi, Bahrain Kannada Sangha and Bahrain Keralia Samagam.