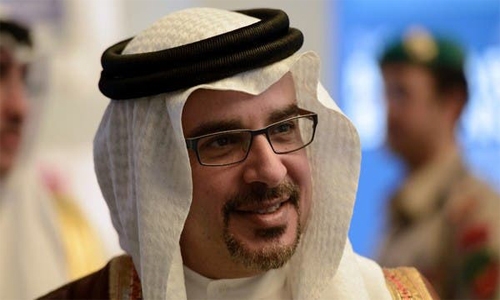 Congratulations poured in for His Royal Highness Prince Salman bin Hamad Al Khalifa, the Crown Prince and Prime Minister, yesterday from all walks of life, as he won global accolades for initiatives in the international health sector and strengthening Bahrain-US relations.

“The award represents a high-level international recognition of His Royal Highness’s leadership capabilities,” said His Highness Shaikh Nasser bin Hamad Al Khalifa, the representative of His Majesty the King for the work of the humanitarian and Youth Affairs, in a message.

The recognition, HH Shaikh Nasser said, by the American organisation reflects the capabilities of the HRH Crown Prince and Prime Minister in leading the Bahrain Team to combat the coronavirus, which achieved remarkable success and earned high international appreciation.

“HRH Prince Salman was instrumental in developing and consolidating relations between Bahrain and the United States of America, and implementing the vision of His Majesty King Hamad bin Isa Al Khalifa in spreading the spirit of tolerance, coexistence, security and peace,” added Shaikh Nasser.

Shaikh Nasser, in the message, also praised the efforts of the Crown Prince and Prime Minister to achieve the comprehensive development of Bahrain in various fields and raise the prospectus of Bahrain at all levels.

HRH Prince Salman deserves the highest appreciation for the role he plays to make life safer for the people of Bahrain, said the Minister of Royal Court, Shaikh Khalid bin Ahmed Al Khalifa.

“The award honours the tireless efforts and continuous follow up of His Royal Highness in ensuring the health and safety of citizens and residents of the Kingdom,” said Shaikh Mohammed bin Abdullah Al Khalifa, the President of the Supreme Council of Health and National Medical Taskforce to Combat the Coronavirus pandemic.

The initiative to provide financial assistance, free vaccines and treatments to all had won the appreciation of the World Health Organisation and praise of different countries, he added.

The Minister of Industry, Commerce and Tourism, Zayed bin Rashid Al Zayani, expressed his pride in HRH winning the prestigious award. “The American “C3” comes in light of the prominent roles of Prince Salman in many fields and leadership of national efforts to address the coronavirus,” the minister said.

A child or woman in every 13 victims of Syria war: UN