Summer is about to wind down in Bahrain, relatively mild winter is finally coming | THE DAILY TRIBUNE | KINGDOM OF BAHRAIN 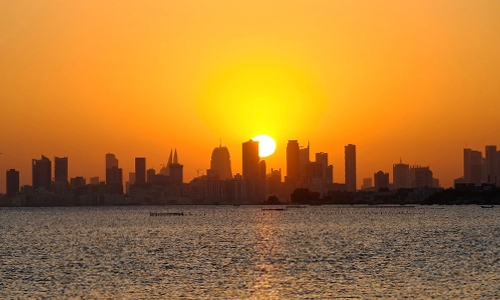 This year’s summer is almost over with the arrival last night of the “autumn equinox”. The phenomenon took place in Bahrain at 10:21 in the evening yesterday announcing the end of summer, which is the longest season of the year, and the advent of the autumn season, which lasts for 89 days, 20 hours and 38 minutes, according to astronomers.

After the “June Solstice” or Summer Solstice, night gradually regains a few minutes from the day, until they become equal by the autumnal equinox, which usually falls on September 22 or 23.

This astronomical event is a reminder from Mother Nature that cool temperature is finally on our doorstep. What does that mean for expatriates? Expatriates, who makeup 52.6% of the population and play a key role in the development of the national economy, can now heave a collective sigh of relief – although only temporarily! Power bills are expected to go down starting this month until March next year.

Every hot summer month – from April to October – expatriates all have the same issue and concern: extremely high electricity and water bills! This year is no exception.

The issue has caused an uproar among the expat population as it comes at a time when many have lost their jobs due to the coronavirus pandemic (COVID-19). Utility bills are a significant part of every household’s monthly budget.

Many of them struggle to pay bills and they leave Bahrain for good as their entire salary is just going towards expenses.

This is making the situation worse for expatriates who send money to their families back home. Many are forced to move into shared accommodation because they are struggling to meet rising expenses, foremost of which is the soaring electricity and water bill.

Tenants, bachelors, couples and large families, who live in apartment buildings that share electricity and water bills also complain about what they describe as an unfair system. In some cases, expats are paying utility bills that are even higher than their monthly rent.