Bahrain is committed to peace | THE DAILY TRIBUNE | KINGDOM OF BAHRAIN 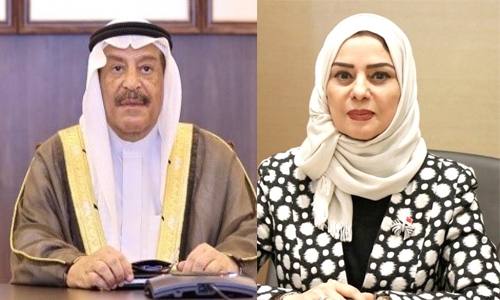 Bahrain’s royal leadership has always been committed to achieving peace at home and abroad. This was emphasised by Bahrain’s top legislative leaders as the Kingdom marked the International Day of Peace, which was observed around the world yesterday under the theme “Recovering Better for an Equitable and Sustainable World”.

Shura Chairman Ali bin Saleh Al Saleh said that His Majesty King Hamad bin Isa Al Khalifa’s ambitious initiatives and comprehensive visions seek to make the values and principles of peace a national and global way of life, boost human development in all fields, and ensure the progress and prosperity sought by all people.

The Chairman noted the Honorary Doctorate from Moscow State University of International Relations, in recognition of His Majesty’s remarkable efforts to promote peaceful coexistence and consolidate dialogue between different religions and cultures. He also praised the efforts of the government led by His Royal Highness Prince Salman bin Hamad Al Khalifa, the Crown Prince and Prime Minister, in implementing HM’s directives and projects regarding peace and coexistence.

Speaker Fawzia bint Abdullah Zainal lauded Bahrain’s strong commitment to peace, compassion and coexistence and the Kingdom’s endeavours to deepen the principles of tolerance and moderation at home and abroad.

The Speaker attributed Bahrain’s commitment to the wise leadership of HM the King that has made the Kingdom a foundation for peace, a fertile environment for coexistence and tolerance among all religions, beliefs and sects, and a distinguished model for social harmony and concord.

She commended HM the King’s remarkable efforts to consolidate the policy of openness, coexistence and acceptance of the others. His Majesty’s initiatives represent a milestone in promoting the values of love and harmony, and concretising the directives to realise the lofty goals of peace and coexistence in a way that contributes to achieving the United Nations goals in sustainable development, she added.

Zainal hailed the great efforts made by HRH the Crown Prince and Prime Minister by developing plans and strategies to enhance Bahrain’s status through noble principles endorsed by religions, charters and international covenants.

The Speaker affirmed that the Council of Representatives, in cooperation with the government, harnesses its efforts and capabilities to enhance national gains and achievements, in approving and implementing relevant global agreements and charters, especially those related to strengthening international security, stability and peace.

The Council is also committed to energising the role of parliamentary diplomacy to spread tolerance and coexistence and to contribute to establishing peace and accords within the international community, she said.

Zainal stressed that Bahrain is keen on making peace the strategic option to end conflicts and disputes in the region, support efforts to enhance security, stability, growth and prosperity around the world, intensify efforts towards development and opening up wider horizons for all, and intensifying and coordinating efforts to tackle the dangers and threats related to conflicts, armaments and violence.