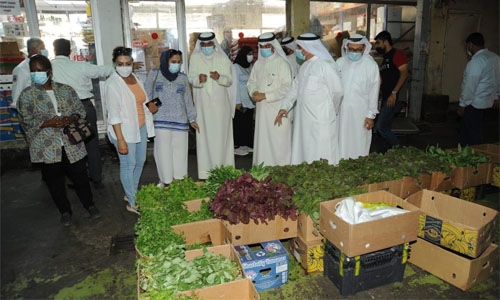 Manama Central market is to get a package of development projects aimed at transforming the widely popular marketplace in the Kingdom further comfortable and appealing to traders and visitors, a top Capital Municipality official said.

Muhammad Saad Al-Sahli, the Director-General of the Capital Municipality, said the projects up for implementation in the upcoming period would enhance the basic infrastructure of the market and its overall appearance.

Al Sahli was inspecting the market with members of the Public Utilities Committee in the Capital Municipality Council headed by Dr Abdul Wahed Al-Nakal.

On the projects, the official said the prime priority is for installing energy capacitors to reduce power consumption and thereby energy costs for running the market.

“Sidewalks and internal streets and the areas surrounding the market will be paved and asphalted in coordination with the Works Affairs,” he said. He added: “Works to demolish and rebuild all toilets in the central market, which comes to around 40 at eight locations are also on the anvil.”

“We are also planning to install a large-sized canopy fitted with lights and fans in the loading and unloading areas,” the Director-General said. The top official also listened to the suggestions and comments raised by some of the merchants.