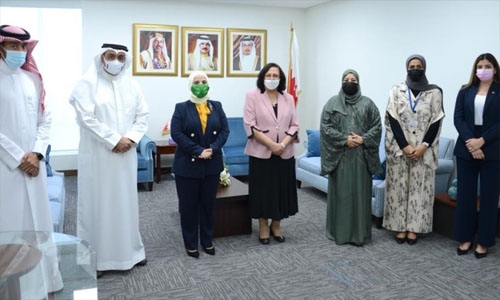 WHO Supremo to visit Bahrain after Eid

Dr Tedros Adhanom Ghebreyesus, the Director-General of the World Health Organisation, will visit Bahrain after Eid-Al Adha. The WHO Supremo will be accompanied by Dr Ahmed Al Mandhari, WHO Regional Director for the Eastern Mediterranean, during the visit for the official opening of the WHO office in Bahrain.

Dr Atatrah is a public health specialist, medical doctor and policy fellow. She joined WHO in 2010 and has worked in 12 countries across WHO’s Eastern Mediterranean and European regions in various capacities.

Al Saleh praised WHO’s efforts in facing the coronavirus pandemic and its prominent role in supporting countries across the world. Health Ministry Undersecretary Dr Walid Al Manea stressed the importance of strengthening cooperation between the Ministry of Health and WHO and highlighted the government’s continuous support to the health sector.

According to WHO, more than one million people in Bahrain have received two doses of the COVID-19 vaccine. “This ensures that almost 70% of the population have an additional layer of protection against the virus.”