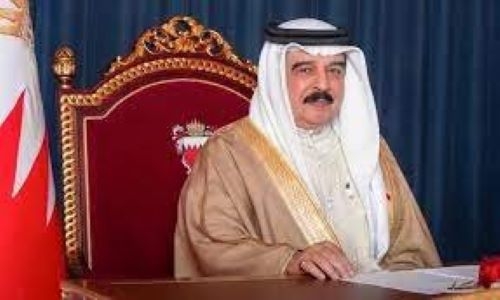 HM the King has presented a model aircraft marking the 70th anniversary of Gulf Air by the Minister, who is the Board of Directors Chairman of Gulf Air.

HM King Hamad expressed thanks and appreciation to the minister for the gift, commending the efforts exerted by the chairman and members of Gulf Air’s Board of Directors to improve the company’s performance and services, praising Gulf Air’s important achievements since its establishment, earning it a prestigious reputation among regional and international airlines.

HM the King affirmed the kingdom’s unwavering support for Gulf Air, being the national carrier of Bahrain that contributed, throughout its 70-year history, to enhancing air transportation in the region, and consolidating the Arab hospitality values of which Bahrain is famous.

HM King Hamad commended the efforts of Bahraini competencies working in Gulf Air’s various sectors, praising their landmark achievements since the establishment of the national carrier.

HM the King wished Gulf Air Board Chairman and affiliates further success in improving the company’s services and fleet to enhance its status and competitiveness at the international level.