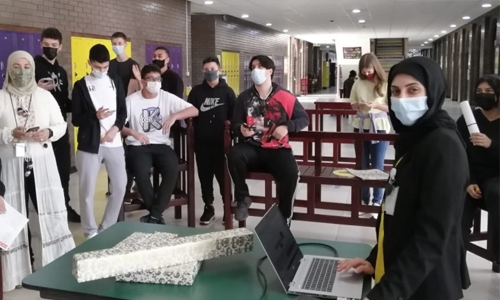 Bahrain School, a champion of cultural and linguistic diversity, set out a program to highlight the contributions Arab Americans have made in education, medicine, technology, government, military service, and culture.

The school builds on the formal recognition of April as Arab American Heritage Month in marking the special occasion.

“This month, we celebrate the accomplishments of educators, writers, poets, and musicians who have promoted the Arab American heritage and pay tribute to their contributions to America’s rich diversity,” Middle High School Principal Shana Seawright said.

Teachers have prepared a set of contributions by Americans of Arab origin and shared them daily with the students and the staff during the morning announcements.

The teachers also organised a competition open to all students to check their knowledge about the Arab world. Prizes were given to the top three winners.

The US State Department said in a release that “Americans of Arab heritage are very much a part of the fabric of this nation, and Arab Americans have contributed in every field and profession.” “We mark National Arab American Heritage Month noting these contributions that are as old as America itself,” Department Spokesperson Ned Price said in a video.

As the month of April coincided with the Islamic month of Ramadan, Bahrain School celebrated Gargaoon, a joyous occasion observed across Bahrain on the 14th evening of Ramadan.

Teaching and learning from ‘comfort’ of home: Bahrain