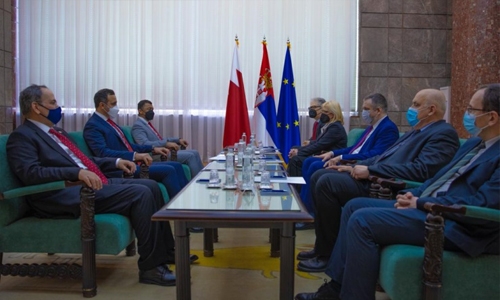 On the sidelines of the official visit of His Majesty the King’s Representative for Humanitarian Work and Youth Affairs, HH Shaikh Nasser bin Hamad Al Khalifa, to Belgrade, the first meeting of political consultations between the Kingdom of Bahrain and the Republic of Serbia was held today.

During the meeting, the Undersecretary of International Affairs welcomed the successful visit of the Serbian President to the Kingdom of Bahrain, which took place last month and resulted in positive outcomes towards growing bilateral partnership between the two friendly countries.

He referred to in this regard the signing of the Memorandum of Understanding on political consultation between the two countries' foreign ministries, as a pivotal step that reflects the constant efforts of the two friendly countries in the framework of strengthening bilateral relations in various fields of cooperation.

He affirmed that the foreign policy of the Kingdom of Bahrain, led by His Majesty King Hamad bin Isa Al Khalifa, is based on the principles of positive cooperation and maximizing mutual benefits with all friendly countries, indicating that the Kingdom is a promising market for investments in the areas of the smart economy, vital sectors, renewable energy, tourism and other productive activities.

He also called for intensifying joint cooperation to confront the repercussions of COVID-19, reviewing in this regard the distinguished efforts and effective measures of Team Bahrain, led by His Royal Highness the Crown Prince and Prime Minister, Prince Salman bin Hamad Al Khalifa.

For his part, the Assistant Minister of Foreign Affairs for Multilateral Affairs expressed his country's aspiration to develop relations of cooperation and joint coordination with the Kingdom of Bahrain in all fields, wishing the Kingdom continued progress and prosperity.

The meeting witnessed discussion of developing areas of bilateral cooperation in the interest of the two friendly countries and peoples as well as discussing the current situation and developments on the regional and international arenas of common interest.