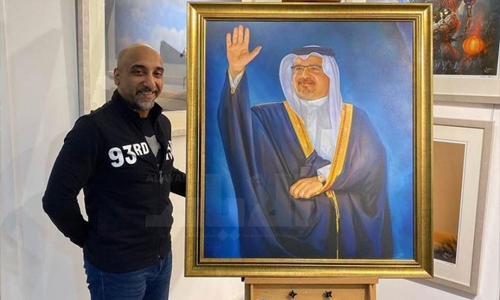 The actual artwork is on display at the Muharraqi Studio.

Al Muharraqi wrote in his account: “The inauguration of a painting of His Royal Highness Prince Salman bin Hamad Al Khalifa, Crown Prince, Deputy Supreme Commander and Prime Minister.” The painting is the cover of the book entitled “The First Visions of Salman” under the patronage of Shaikh Dr Abdullah bin Ahmed Al Khalifa, chairman of the Board of Trustees of the Bahrain Center for Strategic and International Studies.