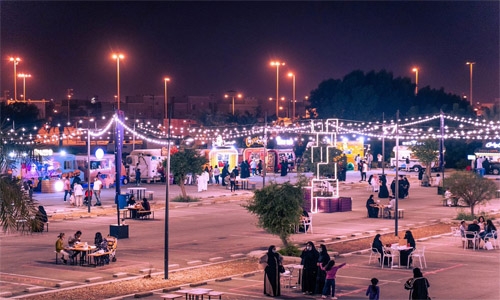 Food truck owners should adhere strictly to safety and health requirements while doing business in the Kingdom, said a top Works Ministry official.

“This is one of the important initiatives to support Bahraini youth, which makes everyone bear a responsibility for its success and produce a civilised image,” said Sheikh Mohammed bin Ahmed Al Khalifa, the Undersecretary for Municipal Affairs at the Ministry of Works, Municipalities Affairs and Urban Planning.

Sheikh Mohammed said the municipality had launched an awareness campaign for Food truck owners saying, “the Capital Municipality is fully prepared to help vehicle owners on laws and requirements.”  Explaining, he said there are general and special requirements that must be adhered to by truck owners.

“Whoever wants to practice this activity must obtain written permission from the owner of a property before parking.” Mobile units are not allowed to park on the streets, to avoid hindering the traffic flow.

“Parking such vehicles directly in front of residential buildings are also against the law.”

Besides, each parked vehicles should leave at least 50 meters between them. “A distance of at least two meters must be left between the mobile vehicle and other vehicles, to ensure the safety of the electrical connections and maintain cleanliness.”

Cleanliness of the place, Sheikh Mohammad said, will be the responsibility of the vehicle owners. “The owners should follow public safety requirements and should not cause noise pollution.”

Food truck owners should obtain prior approval of the Capital Secretariat or competent municipality before parking in places owned or allocated to the municipalities.  The mobile facility should also be ready to move within thirty minutes, upon a request.

On the requirements for practising catering services in residential areas, he said, “The vehicles should be parked inside a property, and could remain open from six in the morning until midnight.”

He added, “It is not allowed to stay beyond this timeframe. Vehicles should also leave a distance of at least 20 meters from other vehicles and neighbouring buildings.”

The owners of the vehicles should remove tables and seats after their service ends.

They are also required to use a silent electricity generator. As for non-residential areas, he said, “A time frame should be determined in agreement with the property owners.

It is also permissible to put walls, tables and chairs in agreement with the property owner.”