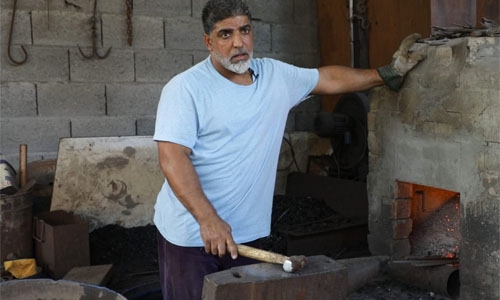 The wait will soon be over for Bahraini blacksmiths

The wait finally is over for Bahraini blacksmiths.

The authorities are now exploring options for establishing a heritage market for blacksmiths in the Kingdom.

MP Ammar Al-Abbas said the Ministry is looking forward to establishing the market in one of the existing projects.

Authorities are also mulling the possibilities of establishing an independent market, given an appropriate site and budget is available.

Blacksmithing is an ancient trade that, like other crafts, saw a downturn during the Industrial Revolution.

Now, the profession is having a small revival as they build new ways of connecting with customers. But it’s still not a huge industry. However, several people in the Kingdom practice this profession.

“This ancient heritage profession has a specificity that calls for preservation because of its role in attracting tourists.

It is also a source of livelihood for a large segment of citizens,” Al-Abbas said.

He said the Ministry of Works, Municipalities Affairs and Urban Planning had welcomed a parliamentary proposal to establish a blacksmith market.

MP Ammar Al-Abbas, along with other deputies, tabled the proposal to create a heritage blacksmith market, to preserve the profession inherited over generations.

Blacksmiths in the Kingdom has also made several requests for an independent market, as their shops in the Al-Naim are now closed.

They had also appealed, an AlAyam report said, to His Royal Highness Prince Salman bin Hamad Al Khalifa, the Crown Prince and Prime Minister, to quickly establish this market, and to provide temporary areas until the completion of the newly designated areas.