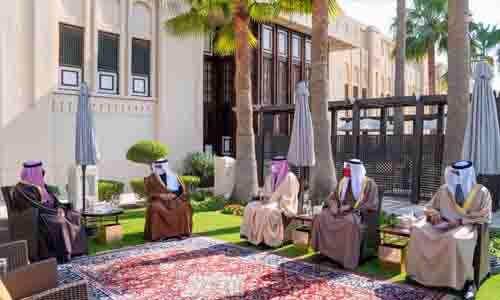 His Royal Highness Prince Salman bin Hamad Al Khalifa, the Crown Prince and Prime Minister, yesterday stressed that justice is a central foundation for advanced nations which seek to espouse progress and prosperity.

HRH the Crown Prince and Prime Minister made the statement as he received Abdulla bin Hassan Al Buainian, President of the Court of Cassation and Deputy President of the Supreme Judicial Council, at Riffa Palace.

During the meeting, His Royal Highness emphasised the critical role played by Bahrain’s judiciary in ensuring the Kingdom’s stability and development, while underlining HM the King’s continued support to the Kingdom’s judicial process.

HRH the Crown Prince and Prime Minister noted that the judiciary is vital to strengthening the rule of law and upholding fundamental rights and the principles of justice.

He also praised the efficiency and effectiveness of Bahrain’s judiciary and the determination shown among all its affiliates to contribute to the Kingdom’s development.

HRH Prince Salman highlighted the importance of continuing to strengthen the performance of the judiciary system and enabling good governance by investing in the Kingdom’s judicial personnel.

Al Buainian expressed his appreciation to His Royal Highness for his efforts to bolster the independence of the judiciary as well as the role and function of the Supreme Judicial Council.