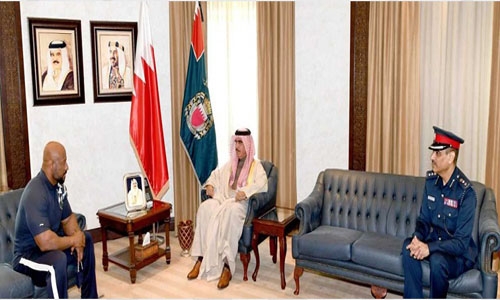 The Minister congratulated Al Haddad on the release, valuing the follow up of His Majesty King Hamad bin Isa Al Khalifa of the conditions of Bahraini seafarers arrested in Qatar until their return to Bahrain.

He hailed the efforts of the government, led by His Royal Highness Prince Salman bin Hamad Al Khalifa, the Crown Prince and Prime Minister, to take the required steps for their release and return to Bahrain.

He stressed the dedication of Bahrain in caring for its citizens and making sure the protection of their safety and rights is a top priority.

He valued the role of Al Haddad and other distinguished Bahraini athletes in the Kingdom’s regional and international sports milestones.

Al Haddad expressed thanks and appreciation to HM the King and HRH the Crown Prince and Prime Minister for the care and support provided to him and other released citizens.

He also appreciated the efforts of the Interior Ministry to ensure the safe return of detained Bahrainis. The meeting was attended by the Public Security Sports Association.