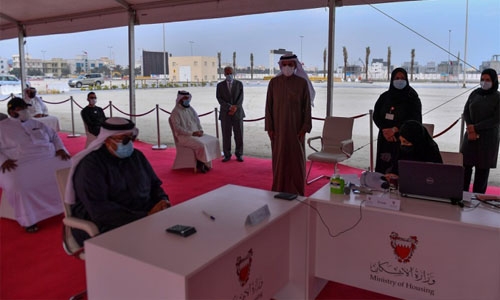 The Ministry of Housing has begun the distribution of Al Buhair housing project units to the beneficiaries.

The project was in line with His Royal Highness Prince Salman bin Hamad Al Khalifa, Crown Prince and Prime Minister’s initiatives to distribute 5,000 housing units in the area.

The minister pointed out that Al Buhair housing project is one of the main programmes of His Majesty King Hamad bin Isa Al Khalifa’s royal decree to build 40,000 housing units, with the honourable support headed by HRH the Crown Prince and Prime Minister.

It is also one of the most prominent housing projects that the ministry is implementing in the southern governorate.

The Housing Services Department is coordinating with those involved in the project management to facilitate the distribution of the units to the beneficiaries as quickly as possible and with the highest quality standards.