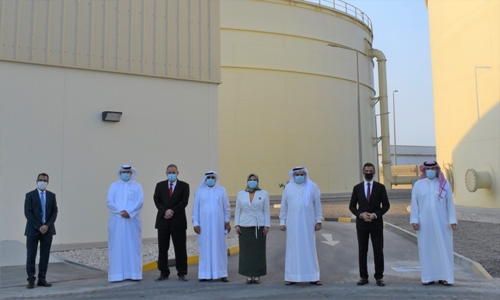 The facility, whose construction has been completed, is part of the first phase of the project to develop the water distribution network.

EWA reached an agreement with the Industry, Commerce and Tourism to transfer the KBSP Station’s affiliation to it in order to run it and develop it according to its operational and storage standards.

The project comprises the construction of two wrought iron buried storage reservoirs of 5 million-gallons capacity each, the establishment of a new building containing three pumps with a capacity of 3.8 million gallons per day each, with electrical appliances and control devices, and the rehabilitation of the one-million-gallon capacity upper reservoir.

The Pan Gulf Panorama ‎Contracting Company WLL constructed all the station’s facilities, and supplied it with the latest mechanical, electrical, control and communication equipment from leading international companies in this field, through a contract amounting to about BD10.6 million that was financed by the Saudi Fund for Development (SFD), within the GCC Development Programme.

The minister extended deepest thanks to SFD in sisterly Saudi Arabia for its constant support for the kingdoms’ development projects, especially in the electricity and water sectors, adding that the project supports the kingdom’s infrastructure.

EWA's CEO said that the project is part of EWA’s plans to increase the kingdom’s strategic water storage capacity to more than 550 million gallons a day.

The facility is within EWA’s strategic plans to develop and increase the capacity of the water transmission networks, in line with the directives of His Majesty King Hamad bin Isa Al Khalifa, and the support of His Royal Highness Prince Salman bin Hamad Al Khalifa, the Crown Prince and Prime Minister, to provide the water and electricity services and meet the growing demand for them, which will enhance the kingdom’s ability to attract investments.