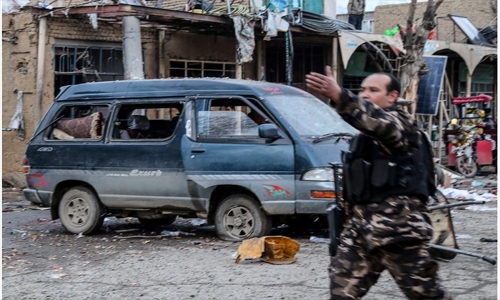 At least 14 people have been killed and 45 wounded when two explosions ripped through a marketplace in the city of Bamiyan in central Afghanistan, according to officials.

Zabardast Safai, the police chief of the eponymous province said on Tuesday the explosives were hidden at the side of a road in Bamiyan, home to many members of the mainly Shia Hazara ethnic minority.

According to the interior ministry, the blasts ripped through the marketplace in the evening rush hour.

“When I reached the market… there were still blood and body parts everywhere. The blast occurred when people were busy shopping,” local resident Anwar Saadatyar told AFP news agency

“I visited the hospital later and saw people crying for their relatives who were killed or wounded in the explosions,” he said.

“There were so many wounded people that doctors didn’t know who to treat first. I will never forget that scene.”

There was no immediate claim of responsibility. The Taliban, which has been waging a rebellion against the foreign-backed Kabul administration since being toppled in late 2001, denied involvement in the bombings.

Bamiyan, a famous tourist resort among local and international tourists, was long cherished as one of the relatively safest corners in Afghanistan due to its remote location in the central mountains.

The dominant local tribe, the Hazara, opposed the Taliban, who massacred thousands of Hazara during their rule.

The mainly Shia minority has often been targeted by groups such as the ISIL (ISIS) affiliate in Afghanistan and also by the Taliban in the 1990s.

In cities such as Kabul, Hazaras have seen repeated attacks in their neighbourhoods, including a brutal daylight assault in the capital in May on a hospital maternity ward that left several mothers dead.

Nearly 6,000 Afghan civilians were killed or wounded in the first nine months of this year as heavy fighting between government forces and the Taliban rages on despite efforts to find peace, according to the United Nations.

Dozens of nations began pledging billions of dollars in aid for Afghanistan at a conference in Geneva on Tuesday, hoping that peace negotiations recently begun between the government and the Taliban will end nearly two decades of war.

The Kingdom of Bahrain strongly condemned and denounces the two terrorist bombings that occurred in Bamiyan Province in the Islamic Republic of Afghanistan, which led to the death and injury of dozens of innocent people.

The Foreign Ministry expressed its deep condolences to the families of the victims, the government and friendly people of the Islamic Republic of Afghanistan, wishing a speedy recovery to all those injured as a result of this heinous terrorist act that contradicts all ethical and human values and principles.

It affirmed solidarity with the Islamic Republic of Afghanistan in its efforts to combat terrorism and maintain security and stability on its territories, reiterating its unequivocal position that rejects violence, extremism and terrorism in all its forms and manifestations, and calls for the concreted efforts of the international community to eliminate the scourge of terrorism.