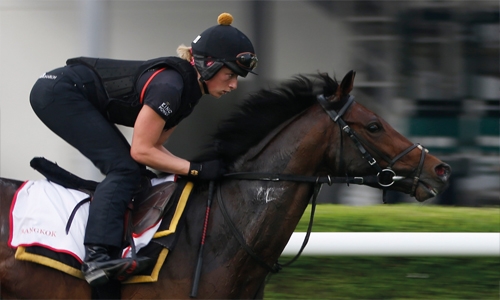 Rashid Equestrian and Horseracing Club (REHC) is in its final preparations for the Post-Position Draw (PPD) ceremony, scheduled to take place today.

All 10 European horses have arrived and established a routine. Trainers and owners have expressed how impressed they are with the courtesy received at entry points upon arrival into the Kingdom.

“It is fantastic to see the cream of European jockeys here in Bahrain and the calibre of race horses that are participating in the International Trophy this year,” said REHC Racing Consultant and Handicapper Phillip Smith.

“This really is a testament of the professionalism shown last year. Everyone had the most incredible feedback regarding the hospitality, but the most important element for us in racing is the track. So, we were delighted that they all said the racing surface is high quality and safe, which has attracted the attention of key competitors.

“I am particularly delighted to see that there is a Japanese horse in the competition. They are great travellers and have offices all over the world. They campaign the best international competitions, so it really is another feather in Bahrain’s cap.

Smith is one of the sport’s most influential figures over the past 20 years. After handicapping the Grand National for the 20th and final time in his career in April 2008, the former British schoolteacher retired from the British Horseracing Authority (BHA).

Smith has helped deliver competitive racing in Britain, assessing handicaps for races, both on the flat and over jumps, where horses carry different weights, depending on their racing ability. The better horses will be carrying extra weight, which will affect the speed at which they gallop.

Today’s PPD will involve a random selection process to determine which position each horse will take in the starting gates. Although it is preferable to draw low rather than high, the 2,000-metre (10 furlong) distance of the outing means it will be anyone’s race, due to the significant run to the first bend.

The Bahrain International Trophy partners are Batelco, Bapco and the EDB.