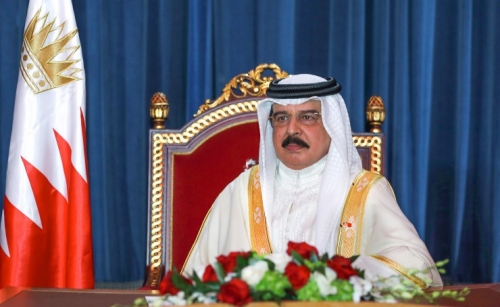 bahrain September 24, 2020
Manama
His Majesty King Hamad bin Isa Al Khalifa, the beloved monarch of the country, may God protect him, delivered the speech of the Kingdom of Bahrain before the work of the seventy-fifth session of the United Nations General Assembly in New York today via video call. The following is the text of the noble speech:

In the name of God, the Most Gracious, the Most Merciful.
Peace, mercy, and blessings of God be upon you.

Mr. President, we would like, at the outset, to congratulate you on your election as President of the General Assembly at its current session, and we wish you all success in running its business. We also thank the former president for his efforts in managing the work of the last session with all efficiency and competence.

We are pleased to join you in celebrating the seventy-fifth anniversary of the founding of the United Nations Organization, which over the past decades has contributed to the consecration of international cooperation and the preservation of world peace for the benefit of all humankind.
We are also pleased to commend the tireless efforts of His Excellency the Secretary-General, Mr. Antonio Guterres, in strengthening the role of the Organization in settling disputes and proposing solutions and initiatives, in order to reach a global order based on the consolidation and protection of human rights, and the achievement of the highest levels of development on the basis of equality and the full participation of states. Members of this high international system.

In this context, the Kingdom of Bahrain stresses its adherence to and respect for its international obligations represented in preserving the strength and stability of the international system and the continuation of its role in achieving public peace. We also share with the United Nations its correct vision in affirming the importance of effective collective action to confront all challenges and dangers, foremost among which is the difficult conditions and harsh repercussions the world is going through on human life and its achievements as a result of the spread of the (Covid-19) pandemic.

This emerging challenge has proven that the international community is in dire need to set aside differences and strengthen areas of human solidarity, to work united in the face of these health threats, and to raise our future readiness to prevent such risks and properly fortify our societies. We praise here the call of the Secretary-General of the United Nations for a ceasefire in all conflict areas in the world to confront the pandemic, a call that has gained widespread global acceptance.

On this important level, the Kingdom of Bahrain has been keen, since the first moments of the outbreak of the pandemic, to extend a hand of cooperation, solidarity, and coordination with the countries of the world and its specialized organizations, such as the World Health Organization, in facing this difficult circumstance. We have formed a national task force, headed by our Crown Prince, to develop and implement an integrated emergency plan that resulted in many national measures, in accordance with the best preventive and remedial measures and practices, in order to preserve, first and foremost, the health and safety of citizens and residents alike. Bearing in mind the urgent need to mitigate the economic and social impacts, we are working hard to diversify its support programs and areas. . To preserve the prosperity and stability of our dear people, and for a speedy return in which we witness the recovery of our national economy.

And based on our concern for the security and stability of the region, and the embodiment of our firm approach to openness and coexistence with all, the establishment of relations with Israel was announced, in a civilized message affirming that our hand is extended to a just and comprehensive peace as it is the best guarantee for the future of all peoples of the region.

Perhaps the courageous step taken by the sisterly United Arab Emirates to revive the hope of peace and stability in the region is a successful and blessed step, by reaching a "historic peace agreement" with Israel, under the auspices and efforts of the United States of America, in exchange for stopping Israel's annexation of the Palestinian lands to enhance peace opportunities And reduce tension, and give the peoples of the region a new starting point for understanding, rapprochement, and peaceful coexistence. While preserving its firm position on the Palestinian issue, we commend the appreciated efforts made by the United States of America to accomplish these important strategic steps.

In this context, the Kingdom of Bahrain calls for intensifying efforts to end the Palestinian-Israeli conflict in accordance with the two-state solution, which we consider an essential entry point for achieving a just and comprehensive peace that leads to the establishment of independent Palestinian states, with East Jerusalem as its capital, based on international legitimacy decisions and the Arab Peace Initiative, in order to form A new stage of work in which we extend bridges of good and good-neighborly relations to build and develop the common interests of the countries of the region.

It is a good opportunity in which we go through your important platform, with our great appreciation for the pioneering role and hard work of the sisterly Kingdom of Saudi Arabia, under the leadership of our brother, Custodian of the Two Holy Mosques King Salman bin Abdulaziz Al Saud, not only at the level of establishing security and peace foundations in the region and the whole world in a manner that takes into account the interest of all The parties, rather because of the outstanding and influential efforts they made during its current presidency of the G20 to formulate a "new decade" in which the aspirations of the world's people for prosperity and stability would be fulfilled. Emphasizing here, the firm approach of our country is to stand with the elder sister in one line in all situations and in all circumstances.

We also cannot fail to express our full support for the continuous efforts of the brotherly Arab Republic of Egypt to consolidate security and regional stability and its serious peaceful endeavors, the last but not the last of which was the initiative of our brother His Excellency President Abdel Fattah Al-Sisi, which gave hope to the brotherly Libyan people to confront and repel foreign interference, and to contribute to Reconstructing the capabilities of the region’s countries based on Egypt's pioneering role in protecting and maintaining Arab national security.

Mr. President, honorable attendance, the success and prosperity of societies is accompanied by the establishment of security and stability in them, and this is what the Kingdom of Bahrain has always pursued, and as an active state within its larger international community, it affirms the need to accelerate efforts in order to achieve our human prosperity through strengthening areas of solidarity and consensus under the umbrella of goals International, to which we have committed ourselves since the foundation of this ancient edifice, and to which we congratulate ourselves with you on the anniversary of its founding for a renewed start at this crucial moment in our contemporary history.

We are proud of our role in this, and we are committed to our support for the United Nations to reach our desired destination in order to achieve the legitimate aspirations of peoples and rebuild bridges of trust and love. . To reach a more secure, stable and peaceful world. . Thank you, Mr. President, and may God’s peace, mercy and blessings be upon you.