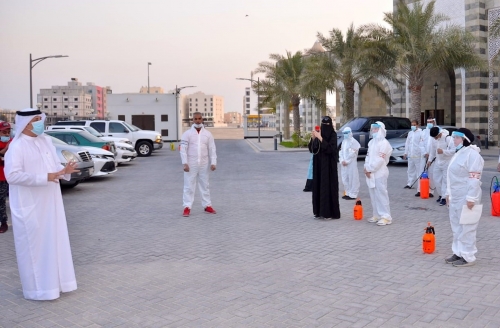 As part of the efforts of Muharraq Governorate in combating the Coronavirus and in support of precautionary and preventive measures, Brigadier Abdullah Khalifa Al-Jeeran, Deputy Governor, attended the sterilization and disinfection campaign organized by the governorate in the Busaiteen area in cooperation with the General Administration of Civil Defense and with the participation of a number of volunteers, where the governorate building and the Hassan Grand Mosque were sterilized.
The Deputy Governor affirmed that in implementation of the directives of the First Lieutenant General Sheikh Rashid bin Abdullah Al Khalifa, Minister of Interior, and following the follow-up of His Excellency Salman bin Isa bin Hindi Al Mannai, Governor of Muharraq Governorate, the governorate continues to confront the Corona pandemic by taking all measures to limit the spread of the virus, including organizing disinfection campaigns in The various regions of the province, in an effort to support national efforts and highlight community partnership with security departments.
Brigadier General Abdullah Khalifa appreciated the role of the Bahrain team and the concerned authorities in enhancing awareness of the importance of implementing the necessary precautionary measures, praising at the same time the cooperation of the people and their response in implementing these measures, as he honored the members of the Bahrain team deserving of their outstanding efforts in support of pioneering national and community initiatives.