THE TRUE COVID PROTAGONIST | THE DAILY TRIBUNE | KINGDOM OF BAHRAIN 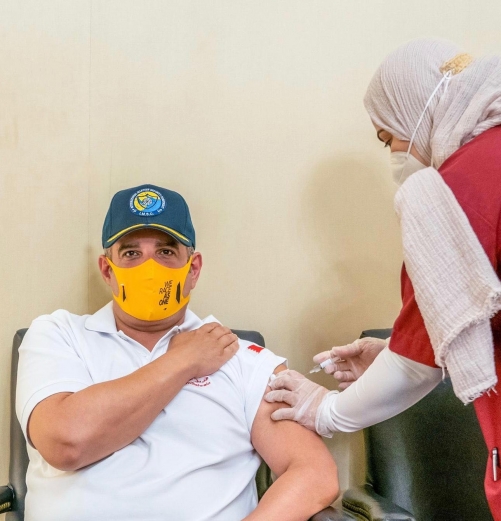 Yesterday was a day to remember in the history of medical science. We have a leader who has set an example by volunteering, without any hesitation, for the clinical trials of the inactivated COVID-19 vaccine, while many other world leaders were demanding and fighting for equitable access to it even before it was developed! Bahrain has made a mark with the bold and courageous step of His Royal Highness Prince Salman bin Hamad Al Khalifa, Crown Prince, Deputy Supreme Commander and First Deputy Prime Minister, in the advancement of medical science and human development.

If I am not mistaken, he is the first leader to participate in such a trial as of this date anywhere in the world. The greatest leaders are those whose life becomes a message, and whose actions speak louder than words. The actions, initiatives, strategies, and dedication taken by His Royal Highness the Crown Prince, under the directives of His Majesty the King, is what has helped Bahrain stand tall and remain ahead of other countries during this pandemic period.

The index of development of a country does not necessarily coincide with the possession of nuclear weapons or fighter jet planes. Instead, it is all about improving the standards of education, agriculture, and medical science. We live in a world where people used to believe that diseases like cholera, chlamydia, or Black Death were caused by miasma, and it took years to give up this theory with the new germ theory

We still remember the names of Sarah Nelmes, a dairymaid, James Phipps, an eight-year-old boy, and the cow known as Blossom, along with Edward Jenner, the father of vaccination. Smallpox eradication was one of the greatest examples of the power of vaccination to control and even eliminate infectious diseases through adaptive immunity.

Polio is one of the very few diseases that can be totally eradicated and can die out through mass immunisation. An estimated five million people were able to walk just because of this immunisation. The efforts taken by millions of volunteers have almost succeeded to put an end to this disease.

We cannot forget Barry Marshall and Robin Warren, winners of the Nobel Prize in Physiology, who discovered the bacterium Helicobacter pylori and its role in gastritis and peptic ulcer disease. In 1985, Marshall showed by self-administration that this bacterium causes acute gastritis and suggested that chronic colonisation directly leads to peptic ulceration.

These results were major challenges to the prevailing view that gastric disorders had a physiological basis rather than being infectious diseases. The work of Marshall has produced one of the most radical and important changes in medical perception in the last 50 years.

A prudent leader is one who is courageous, can create and passionately communicate a clear vision that inspires the team to bring that vision to fruition. Today, we have a name from this small island to add along with Edward Jenner, Elizabeth Blackwell, Louis Pasteur, Joseph Lister, Florence Nightingale, and many others, who have shown empathy, courage, dedication, and commitment and to bring more smiles to the society. We salute you, our dearest Crown Prince.