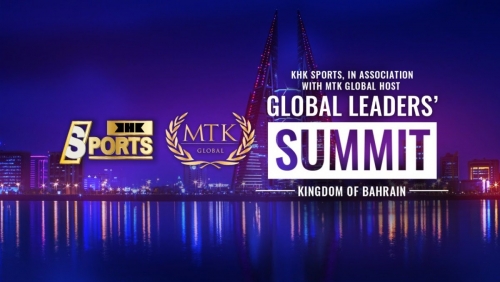 The pioneering conference will see industry leaders unite in a desire to take the sport of boxing to the next level. The unprecedented event will allow influential figures from all sides of the notoriously fragmented boxing world to sit down and discuss collaborating on projects which will grow boxing for the benefit of all.

The historic meeting is a unique opportunity for leaders to pledge their support and help shape the future of the sport for years to come. KHK and MTK added that following the summit, the Kingdom of Bahrain will host its first ever world title contest, broadcast live to the US, UK and around the world.

Both the summit and the world title bout are confirmation that KHK and MTK remain committed to the continued growth of Bahrain as a world-renowned international sporting hub and that, with KHK and MTK’s support, the entire Middle Eastern region is open for major combat sports’ events.

Mohammed Shahid, CEO of KHK Sports, KHK MMA and President of BRAVE Combat Federation commented on the announcement, “Thanks to HH Shaikh Khalid bin Hamad Al Khalifa, the Global Boxing Summit is the start of a new era. We are starting from where the boxing industry has stopped at today and taking it from there to new heights.

KHK Sports and MTK Global together will make this summit a historic night for Bahrain and the global boxing world. We are very excited and honoured to be part of this legacy. ” Special Advisor to KHK Sports, Daniel Kinahan said, “For years, the thought of getting all the world leaders in boxing into one room together would have been dismissed as fantasy.

But the major players see the potential for growth within our industry and understand that the sky is the limit when different parties co-operate and collaborate. This truly groundbreaking event will capture the attention of boxing fans across the world and have a generational impact on our sport.

In doing so it will realize a dream of HH Shaikh Khalid while leaving a legacy for Bahrain.” MTK Global President, Bob Yalen said, “This is a massive step in the right direction for the world of boxing and MTK are thrilled to play our role in assisting HH Shaikh Khalid bin Hamad Al Khalifa and the team at KHK Sports in making this a reality.

MTK Global has always prided itself on its great working relationship with all the leading promoters, managers and leaders in the sport. This neutrality and position of trust has allowed us to play our part in bringing traditional rivals together. This is HUGE and going to cause a wave of excitement in the sport.”

The impact of the ongoing Covid-19 pandemic and associated travel restrictions is being closely monitored with exact dates for both the summit and the title fight to be confirmed as soon as permitted.