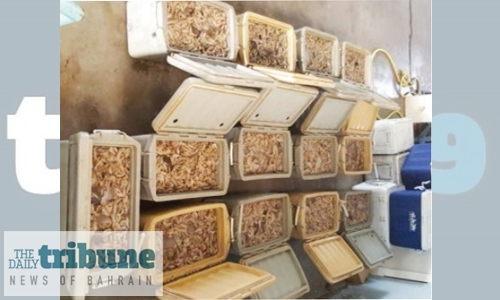 Close to 300 fishermen were caught for illegal shrimping since the ban came in place in 2018, it is learnt. The statistics revealed by Works, Municipalities Affairs and Urban Planning Minister Essam Khalaf, during the parliament session yesterday, showed that 297 illegal shrimpers have been arrested since the implementation of ban. Lawmakers urged strong action against those who are engaged in this illegal activity.

They also shared complaints of Bahraini fishermen, who claim many Asian fishermen have been found engaging in this illegal activity. A video was screened before the session, showing Asian fishermen flouting rules and illegally catching shrimp. Bahrain’s fish stock has declined almost 90 per cent when compared to that of a little over a decade ago, a study said last year.

The study has warned that the remaining 10pc will as well soon decline if urgent steps are not taken to preserve the marine resources. The study conducted by the Marine Resources Directorate within the Works, Municipalities Affairs and Urban Planning Ministry, has attributed the sharp decline in fisheries wealth to a number of factors.

Among them the prominent one is the Karaaf method, which is heavy fishing near the seabed, especially to catch shrimp. The process kills many other marine species and small fish.  According to the study, the second reason is overfishing. “More than 6,400 expatriate fishermen work under 1,700 professional fishing licences obtained by the Bahraini fishermen. “This excessive fishing is dangerously affecting the Kingdom’s fish stocks.”

The experts have predicted many varieties of fish will soon vanish from Bahraini waters and the existing fish stocks will no longer be able to fulfil the consumption requirements of the market. The study revealed that the number of fish species seen in Bahraini waters has declined from 80 to four in the past few decades.

“The Karaaf fishing method destroys the marine environment as it catches all species at once, not allowing the smaller ones to grow and reproduce. “If this method isn’t stopped, the four species of fish that are marked safe will be reduced and Bahrain will become an importer of fish from its existing status of an exporter,” the study warned.

The study recommended the Government to encourage fish farms while implementing the regulatory procedures mentioned in Law Decree 20 of 2002 to protect marine resources. “What required is a strict regulation while implementing law and inspections to enforce it. The delay in taking these procedures means that the tackling this issue will be more difficult and costly in the future,” the experts said.

The Marine Resources Directorate warned that fishing using the Karaaf method endangers the growth of small fish that are caught during heavy fishing near the seabed. The directorate said that 60-70 per cent of Karaaf catch is small fish, which are usually disposed of by the fishermen. It also revealed that more than 46,000 metric tonnes of shrimp were caught using the Karaaf method in the last ten years.

The latest official statistics showed that there are around 1,400 non-Bahraini fishermen working under 276 licences meant for shrimping alone. It means 22 per cent of total expatriate fishermen working in Bahrain are employed in shrimping.

The Kingdom has been implementing a ban on shrimping during the breeding time during the past few years. Strict punishments for violating the ban include imprisonment, fines and seizure of boats.