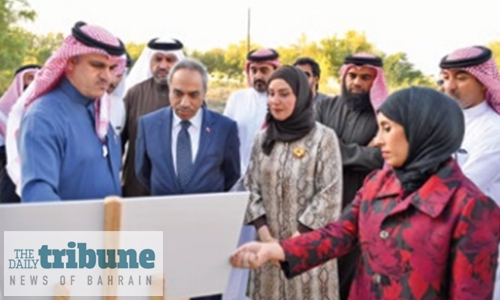 The visit is in line with the directives issued by His Royal Highness Prince Salman bin Hamad Al Khalifa, Crown Prince, Deputy Supreme Commander and First Deputy Premier The Ministry of Works, Municipalities Affairs and Urban Planning Essam Khalaf has started implementing of development projects, which aim enhance services for citizens as part of municipal schemes that contribute to the achievement of the sustainable development goals, in the prosperous era of His Majesty King Hamad bin Isa Al Khalifa.

The Speaker hailed HRH the Prince’s directives in support of legislative-executive cooperation, which would benefit Bahrain and citizens and bolster the development process, led by HM the King. She hailed the string of development projects being carried out nationwide, commending the Southern Governorate, Southern Municipality and Southern Municipal Council for their efforts to serve Bahrain and citizens.

The minister shed light on the project which consists in building a playground, a walkway, in addition a café, kiosks, arcade games, a service building and other facilities. He announced that bids would be invited soon for the project which covers 10,240 square metres. Other development projects were also inspected.