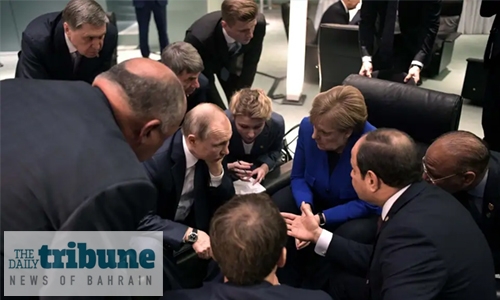 Bahrain has welcomed the final communique of Berlin Conference on Libya, held in Germany. The participants during the conference agreed on a comprehensive plan to settle the crisis in Libya, pledged not to interfere in Libyan internal affairs and wok towards the disarmament of armed groups, among other binding results and commitments that represent an important step toward the achievement of a comprehensive political settlement.

The Kingdom praised Germany’s role and the keenness of the participating countries in restoring security and stability to Libya. Bahrain expressed its aspiration for greater efforts and work in accordance with the Skhirat Agreement that was concluded in 2015 in Morocco.

The agreement is the political framework that is accepted by the international community and all parties in Libya, making it a solid basis for resolving the crisis in a way that fulfils the aspirations of the Libyan people in security and stability. It preserves the safety and territorial integrity of Libya and leads to the elimination of violence, extremism and terrorism in all its forms.

World leaders were ready to pledge an end to all foreign involvement in the conflict in Libya after a UN-sponsored peace summit in Berlin. The UN wants foreign powers who wield influence in the region to stop supplying weapons, troops or finance — either to the UNbacked Government of National Accord (GNA) in Tripoli or the rival Libya National Army (LNA) led by eastern military strongman Khalifa Haftar.

All sides will be asked to sign up to a plan to refrain from interference, and commit to a truce that leads to a lasting end to hostilities. A draft communique from the summit also urges all parties to re-commit to a widely ignored UN arms embargo and raises the prospect of Libyan political talks in Geneva at the end of the month.

Turkish President Recep Tayyip Erdogan has sent military trainers and advisers to help the beleaguered forces of GNA leader Fayez Al Sarraj, and has also redeployed up to 2,000 Turkish-backed mercenary fighters from the conflict in Syria. French President Emmanuel Macron said he had “acute concerns over the arrival of Syrian and foreign fighters in the city of Tripoli,” and added: “That must end.”

Clashes since April have killed more than 280 civilians and 2,000 fighters and displaced tens of thousands, until a fragile ceasefire backed by Russia and Turkey was put in place on Jan. 12. Nevertheless, GNA forces accused Haftar’s militia of opening fire on them in southern Tripoli on Sunday, and Al Sarraj asked for international “protection troops” if Haftar kept up his offensive.