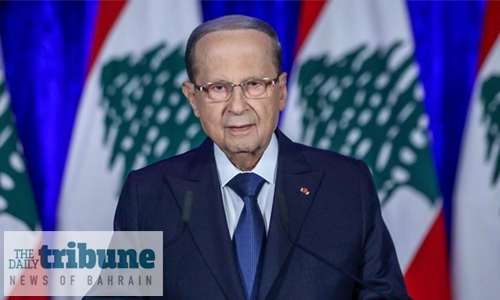 Lebanon’s under-fire president is set to meet Monday with top security officials to discuss rare violence over the weekend that left hundreds wounded in the protest-hit country. Michel Aoun will be joined by the care-taker ministers of the interior and defence as well as the chiefs of the military and security agencies in the early afternoon, his office said in a statement.

The meeting will touch on “security developments” in a country rocked since October 17 by unprecedented protests against a political class deemed incompetent, corrupt and responsible for an ever-deepening economic crisis. It will also address “measures that need to be taken to preserve peace and stability,” the staterun National News agency (NNA) reported.

Demonstrators at the weekend lobbed stones, firecrackers and street signs at riot police, who fired tear gas and rubber bullets to clear a flashpoint road near parliament. Over the most violent weekend in three months of street protests, some 530 were wounded on both sides, according to a toll compiled by AFP from figures provided by the Red Cross and Civil Defence.

Lawyers and rights groups have condemned the “excessive” and “brutal” use of force by security forces. Human Rights Watch accused riot police of “launching tear gas canisters at protesters’ heads, firing rubber bullets in their eyes and attacking people at hospitals and a mosque.”

Internal Security Forces, for their part, have urged demonstrators to abstain from assaulting riot police and damaging public or private property.