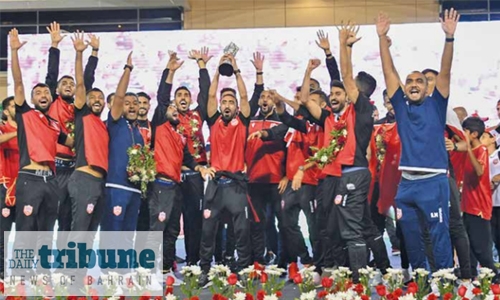 Bahrain’s national football team has been awarded more than BD 4 million so far for winning the title in the 24th Arabian Gulf Cup earlier this week.

This is according to a high-ranking official in Bahrain football who is closely linked to the national team. The official said that following their historic victory, which has been celebrated by the entire Kingdom of Bahrain, the national team has been receiving all kinds of financial rewards as well as valuable gifts, such as cars, diamond rings, and others.

These awards come either from companies, groups or individuals. He added that there is no official total for the amount awarded to the national team, but if it were all put together, it would come up to more than BD 4 million to date. Bahrain received US$3 million alone, around BD1.13 million, from the Gulf Cup’s organising committee – US$ 2 million was the grand prize for winning the tournament while the other US$ 1 million was for participating.

This US $1 million amount was given to all the national teams that competed. Meanwhile, the Bahrain national team were also awarded more than BD1.6 million last night on a live telecast on Bahrain TV. His Royal Highness Prince Salman bin Hamad Al Khalifa, the Crown Prince, Deputy Supreme Commander and First Deputy Prime Minister, awarded the team with BD200,000.