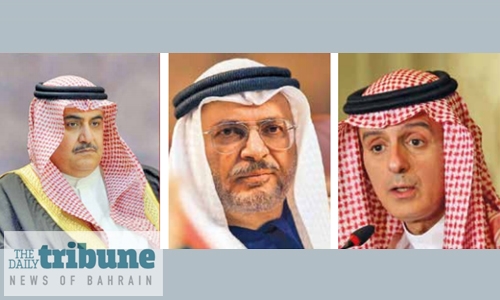 The Gulf nations yesterday rapped Qatar for displaying a lackadaisical attitude at the Gulf Cooperation Council (GCC) summit which, experts said, earlier signalled a possible thaw in the regional dispute.  However, dampening hopes of reconciliation was Qatari Emir’s decision to skip the summit and instead send a delegation which the Quartet found as not having “any authority or directive that could contribute to resolving its crisis.”

Prime Minister Abdullah bin Nasser bin Khalifa Al Thani was also the most senior Qatari official to attend the gathering of Gulf leaders since the emir attended a 2017 summit held in Kuwait. “Qatar adopted once more a terribly negative approach by sending a representative of the Emir,” accused Bahrain’s Foreign Minister Shaikh Khalid bin Ahmed Al Khalifa after the summit. This attitude, Shaikh Khalid said, reflects Qatar’s lack of seriousness to put an end to the crisis which began in June 2017.

Saudi Arabia, the UAE, Bahrain and non-GCC member Egypt imposed a political and economic boycott of Qatar in June 2017 over allegations that Doha backs terrorism Shaikh Khalid further rejected Qatari foreign minister’s statement that the “talks with Saudi had gone beyond the demands and are now looking into a perspective for the future” as not reflecting the summit views.

Reports earlier said that Riyadh has softened its stance on a list of 13 demands to lift the embargo, including that Doha cut links to the Muslim Brotherhood, close Al Jazeera TV, shutter a Turkish military base and reduce ties with Iran, with whom Qatar shares a giant gas field. Rejecting claims, Shaikh Khalid said, “Our four countries are fully committed to their firm positions and legitimate demands based on the six principles adopted by the Cairo meeting on July 5, 2017.”

The foreign Minister said these principles call for a “commitment to combating extremism and terrorism, an end to all acts of incitement and discourses inciting to hatred or violence and full adherence to the 3013 Riyadh Agreement and its supplementary agreement of 2014.”

He added: “The principles also call for commitment to all the outcomes of the May 2017 Arab-Islamic American Summit in Riyadh, non-interference in the internal affairs of countries, not supporting outlawed entities and the affirmation of the responsibility of all countries in confronting all forms of extremism and terrorism as a threat to international peace and security.”

In Abu Dhabi, the UAE State Minister for International Affairs, Dr Anwar Gargash, echoed Bahrain’s view on the issue saying, “the Qatari crisis continues.” Dr Gargash described Emir’s absence as “a misjudgment of the situation by his advisors.” On the possibilities of resolving the 2-1/2 year boycott, he said, “the onus lies with the one that caused the crisis, to reconsider erroneous policies that led to its isolation.”

Settling the dispute should be “based on the primacy of the interest of the Council,” he later wrote on his twitter handle. “The responsibility begins with the one who triggered the crisis and who should review the wrong policies that led to his isolation. Commitment to covenants, restoring credibility and ending support to extremism and interference are the start of that treatment.”

Earlier, Saudi Minister of State for Foreign Affairs Adel Al Jubeir said that resolving the crisis depends on Qatar taking the steps needed for a change in the situation. “The Qataris know what these steps are,” he said in a speech at the Mediterranean Dialogues in Rome.

Al Jubeir stressed that the Qatari regime has adopted some changes in legal aspects related to supporting terrorism. However, these steps are not enough to solve the crisis, and there is a lot to be done, he said. Meanwhile, Secretary-General Abdullatif bin Rashid alZayani after the 40th Summit held in Riyadh said that the Council will treat “any aggression against any country in the six-nation Gulf Cooperation Council as an attack against the whole council.”

His comments came after a closed-door meeting which stressed the need to boost military and security cooperation and pledged to create a financial and monetary bloc by 2025. After the communique was read out, Kuwait’s ruling emir Sheikh Sabah al-Ahmad al-Sabah, who has long pressed to resolve the Qatar dispute, commended the call for unity.

Addressing King Salman, he said: “God willing, the coming meetings will be better than past meetings.”

During his opening speech, the Saudi King stressed that the Gulf countries must unite against the Iranian regime’s aggression in the region.

“The Iranian regime has continued its aggressive policies in the region that undermine the stability of neighbouring countries,” King Salman said.