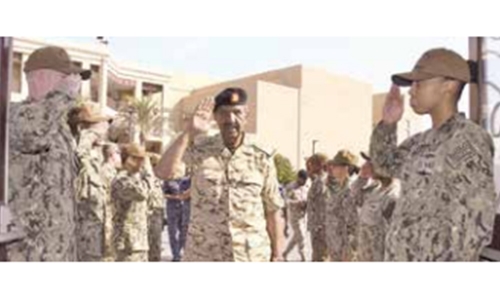 Bahrain Defence Force ( BDF ) Command - er-in-Chief yesterday inaugurated a command centre for the US-led naval coalition, established in response to a series of attacks on oil tankers, within the US Naval Support Activity. The facility, International Maritime Security centre, is equipped with modern and advanced systems to support the coalition known as International Maritime Security Construct (IMSC) at warding off any perceived threat to the world’s oil supply.

The attacks heightened the risk of disruption to Gulf oil exports shipped through the Strait of Hormuz. Field Marshall Shaikh Khalifa bin Ahmed Al Khalifa said Bahrain and the United States would continue to intensify efforts to ensure regional stability and security. “The BDF is continuing its coordination between the two friendly countries at various levels, especially concerning military coordination and defence cooperation,” he added.

Shaikh Khalifa praised the “efficient role” of US Naval Support Activity in carrying out various “major and significant” maritime missions. Vice Admiral James Malloy, commander of US Naval Forces in the Middle East, said Operation Sentinel is a defensive measure aimed at protecting Gulf waters. “While Sentinel’s operational design is threat-based, it does not threaten,” he said during a ceremony at the IMSC’s command centre.

“We employ capable warships on patrol, but there is no offensive line of effort in this construct, other than a commitment to defend each other if attacked. “Our commitment to the region isn’t short-lived, it is enduring, and we will operate as part of Sentinel for as long as it’s needed -- as long as the threat looms.” Defence Minister General Abdullah bin Hassan Al Nuaimi and Naval Captain Shaikh Isa bin Salman bin Hamad Al Khalifa were present.