India has a bigger role to play in Bahrain: Al Shola | THE DAILY TRIBUNE | KINGDOM OF BAHRAIN 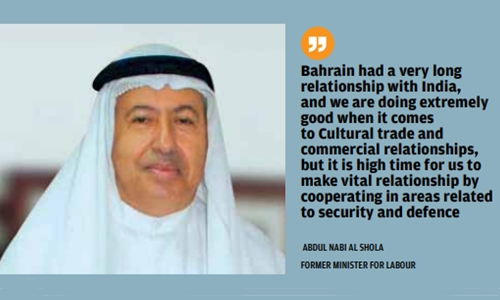 India has a bigger role to play in Bahrain: Al Shola

Bahrain attributes prime importance to the visit of Indian Prime Minister Narendra Modi mainly because of the existing economic and political situations in the Middle East, said Abdul Nabi Al Shola, the former Minister for Labour.

“Bahrain had a very long relationship with India, and we are doing extremely good when it comes to Cultural trade and commercial relationships,” the former minister added.  Al Shola, however, pointed out that “it is high time for us to make vital relationship by cooperating in areas related to security and defence.”

The trust India gained during the last 200 years of relationship with us is “much beyond than what we have with other countries,” Al Shola said. “India for sure is a reliable partner, whom we can trust 100pc.” The recent investment of Saudi Aramco in an Indian firm, Al Shola said, “is a true example of the trust we have in the development of India.”

The former minister also expressed his appreciation of India’s remarkable achievements in space technology.  Bahrain, he said, can surely explore the possibilities of using such feasible economical research centres with a strategic tie-up with India.