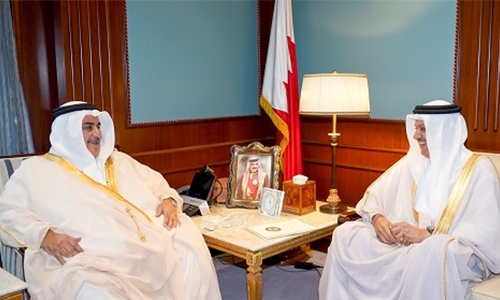 The Minister of Foreign Affairs, Shaikh Khalid bin Ahmed bin Mohammed Al Khalifa, received in his office at the Ministry’s General Court the Secretary-General of the Co-operation Council for the Arab States of the Gulf, Dr Abdullatif Al Zayani.

During the meeting, the Minister of Foreign Affairs welcomed Dr Al Zayani, praising him for his role in developing the Secretariat General of the GCC as well as his efforts to enhance the relations between the GCC and various countries and regional and international groups at all levels, namely the political and economic levels.

The Minister also stressed the need to continue coordinating towards all issues and exchanging views towards the mechanism and frameworks in order to overcome the challenges facing the region and establish peace, security and prosperity.

For his part, Dr Al Zayani expressed his pleasure to have met with the Minister of Foreign Affairs, hailing the role of the Kingdom of Bahrain in establishing peace and security. He also wished the Kingdom further progress and prosperity.