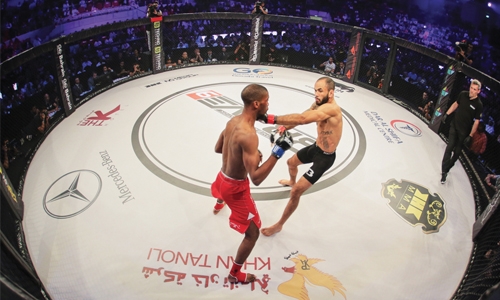 Manama : The opening fight was Atif Mohamed of India versus Haidar Farman of Pakistan. Farman dominated most of the fight by throwing multiple combination punches which Mohamed struggled with. In the second round Farman landed a spinning back kick and followed it up with more pressure in the Straw-weight division. The third round followed the same flow as the previous two. However in the ending stages Mohammed, who showed great heart and resilience through the entire fight, landed fantastic combination punches. Farham was eventually announced winner via unanimous decision. 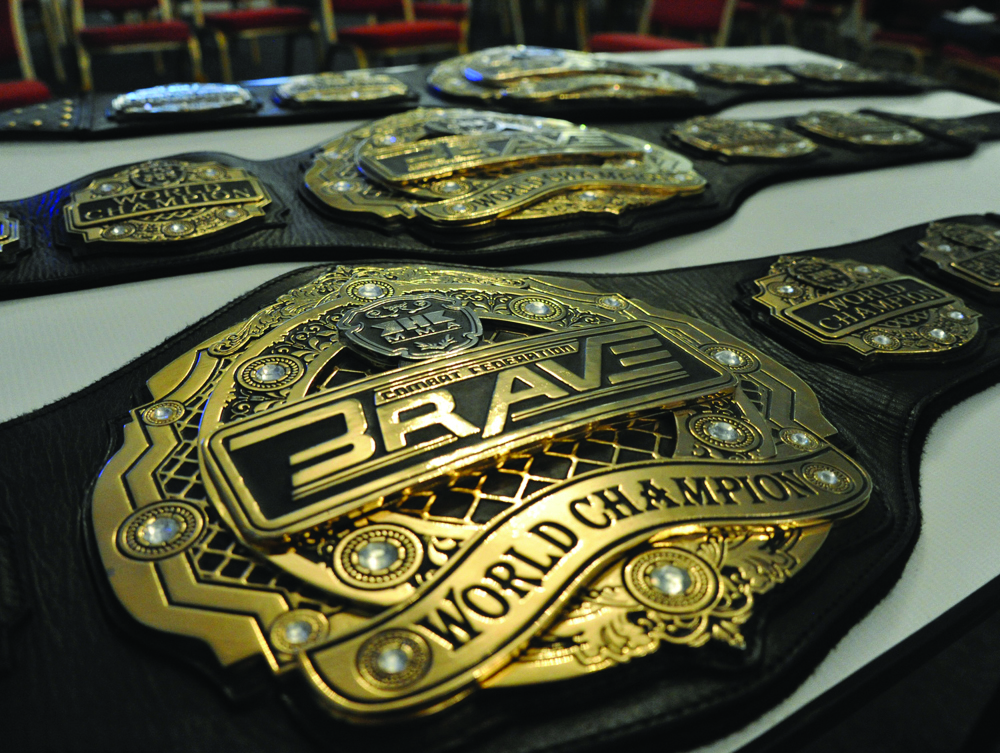 First win for a Middle Eastern country came when Jalaal Al Dajaa  from Jordan won against Jeremy Pacatiw of Philippines through a technical knockout in the first round. Al Dajaa took down Pacatiw with a great shot and kept hammering until referee gave a technical knockout. 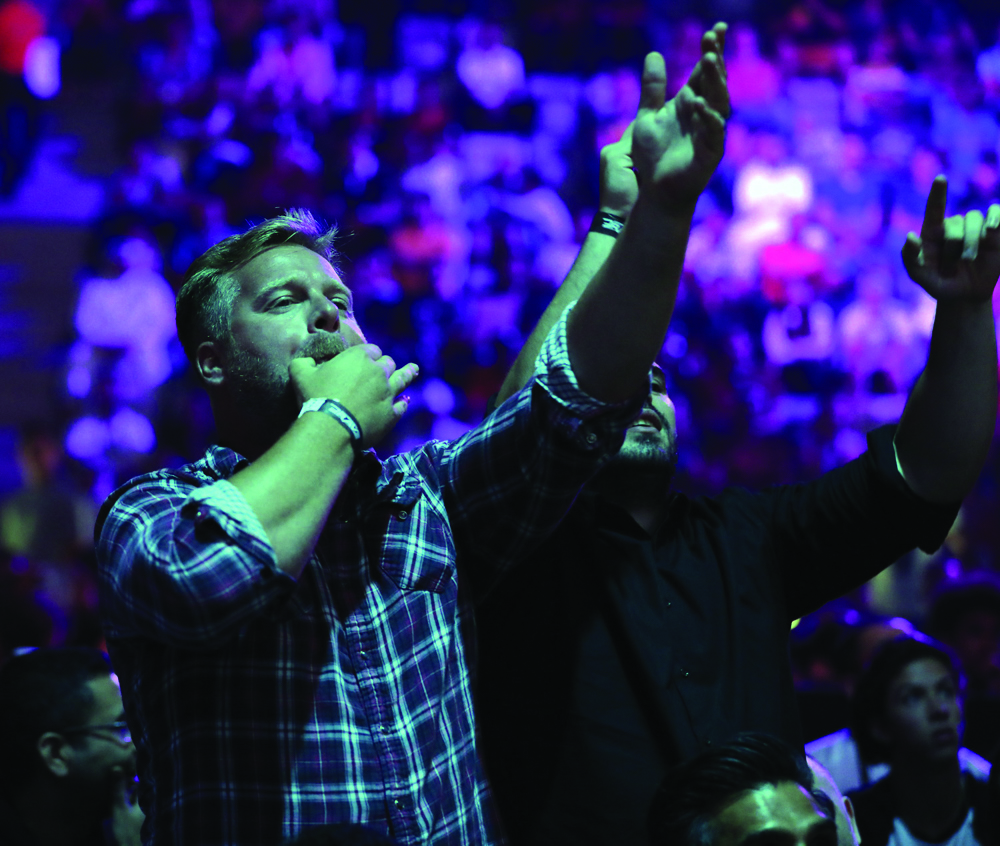 Leary wins by knock out

The third fight was Daniele Scatizzi representing Italy vs Charlie leary who was fighting out of England in the lightweight division. It was all Scatizzi in the opening round, he was aggressive with his grapple techniques. However, Leary did well in getting out of the locks attempted by Scatizzi in the second round and asserting his game style. After coming to life in the second round, Leary took home the win in the third round at 1.28 minutes by technical knock out. 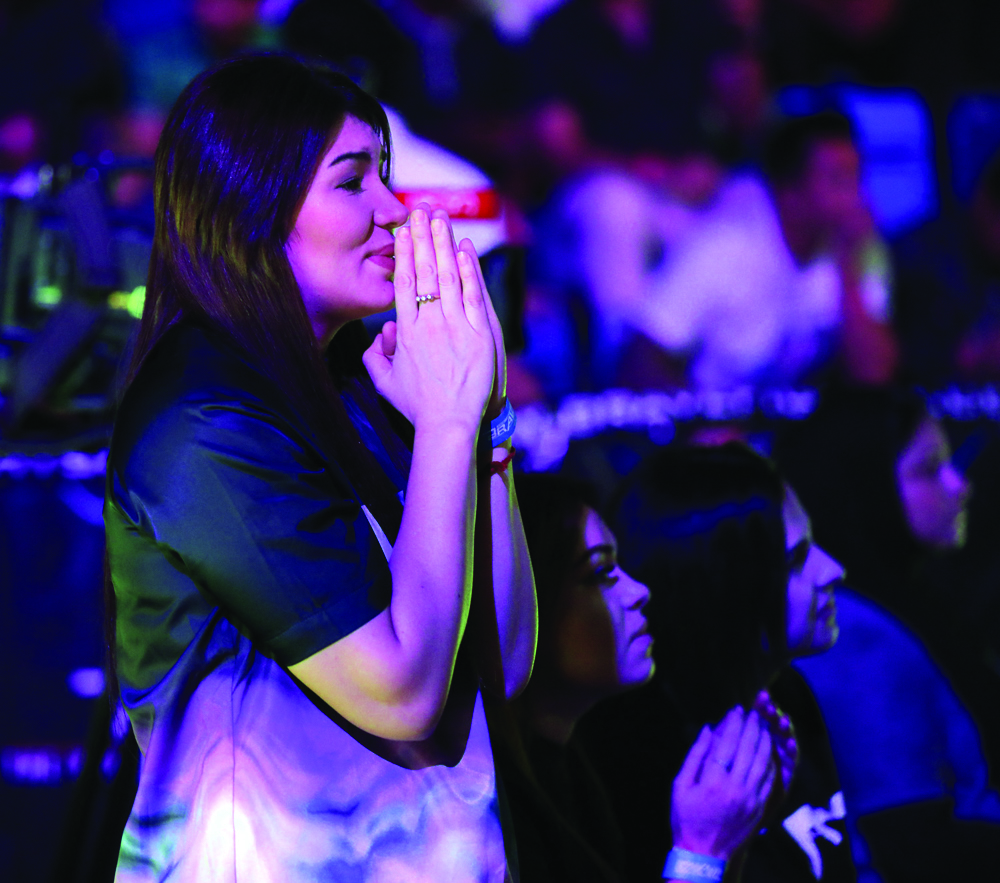 Next was a Catchweight bout of Hardeep Rai representing KHK MMA vs Sam Patterson from UK. Despite the significant height advantage of Patterson, Rai finished the job within the first round with a technical knockout. Overjoyed, Rai jumped out of the cage the celebrate with HH Shaikh Khalid and Mohammed Shahid. 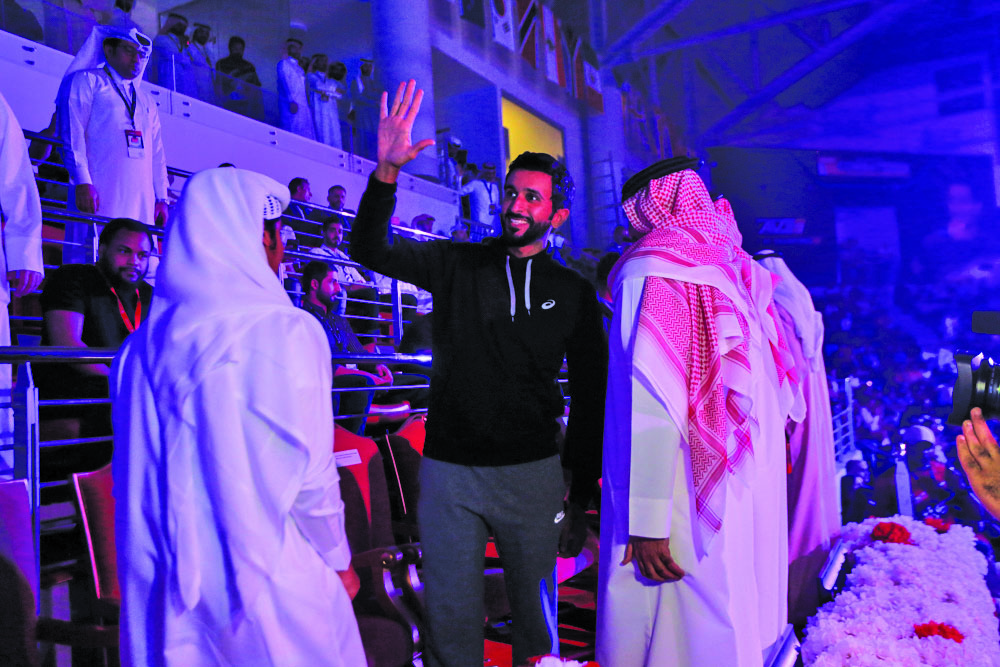 In the next bout, Middleweight division, Ikram Aliskerov met Jeremy Smith. Russia’s Aliskerov knocked out his opponent in the first round with a right hand punch taking down Smith momentarily but Smith seemed to be getting back up. Despite this, the referee awarded the win to Aliskerov via technical knock out, to the disappointment of Smith. 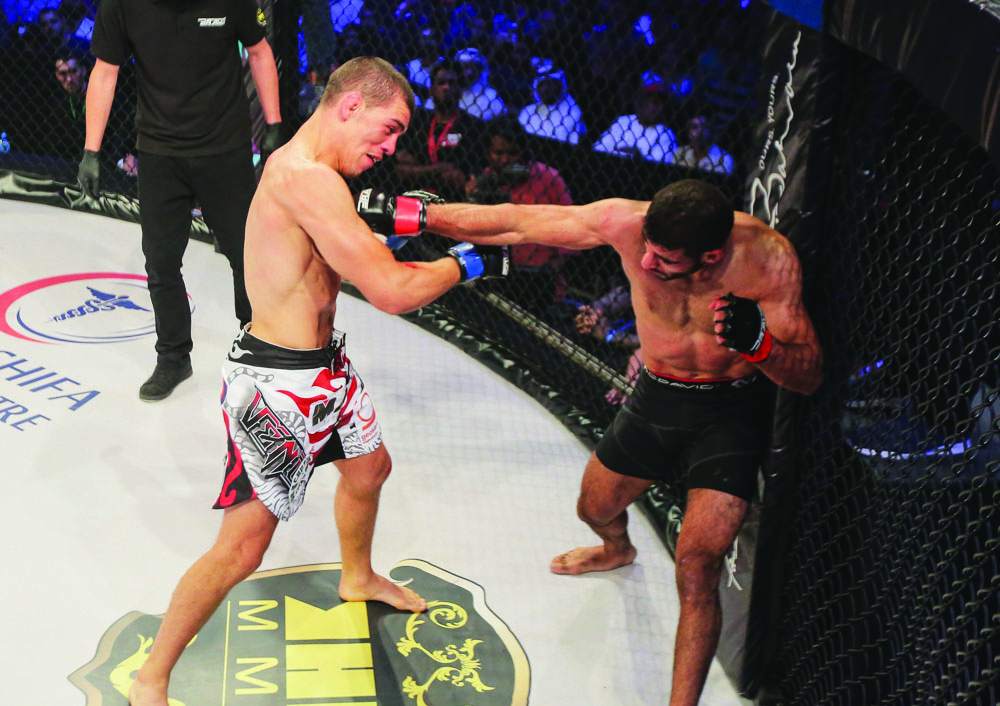 Bantamweights Frans Mlambo and Michael Deiga-Scheck faced off in the next fight. It became yet another short fight when Mlambo, knocked out his opponent at 1.27 minutes into the first round. It was another controversial decision as Deiga-Scheck appeared to get back up quickly to recover. 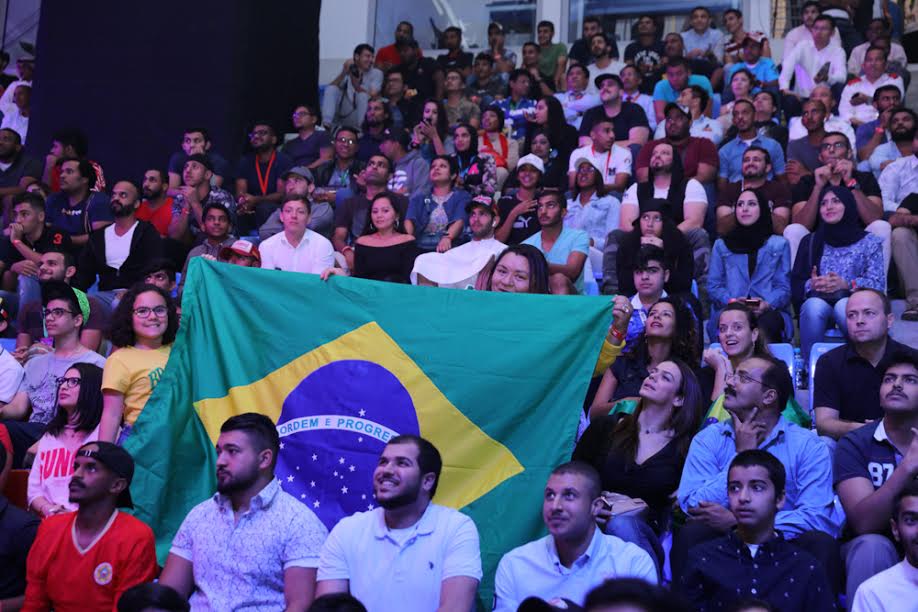 Another Arab fighter entered the octagon when Egyptian Ahmed Amir fought Swede Erik Carlsson. The bout stated with Amir throwing in some combinations. He then quickly put Carlsson to the ground to grapple. Although Amir dominated grappling exchanges in the first round a strong right hand punch from Carlson put down Amir in the second round. Despite the heavy fall, the referee let the game go on this time. After taking a number of blows from Carlson the Egyptian recovered to turn around the round to his favor. The third round did not go well for Amir who was tired by then and took significant damage, suffering a cut. It was a tense few minutes for the crowd awaiting the decision, Ahmed Amir was eventually announced winner via Split decision.

Amir then praised his opponents’ skill, “Eric is a great fighter, I have grown in respect for him, and this was the best fight of my life.” 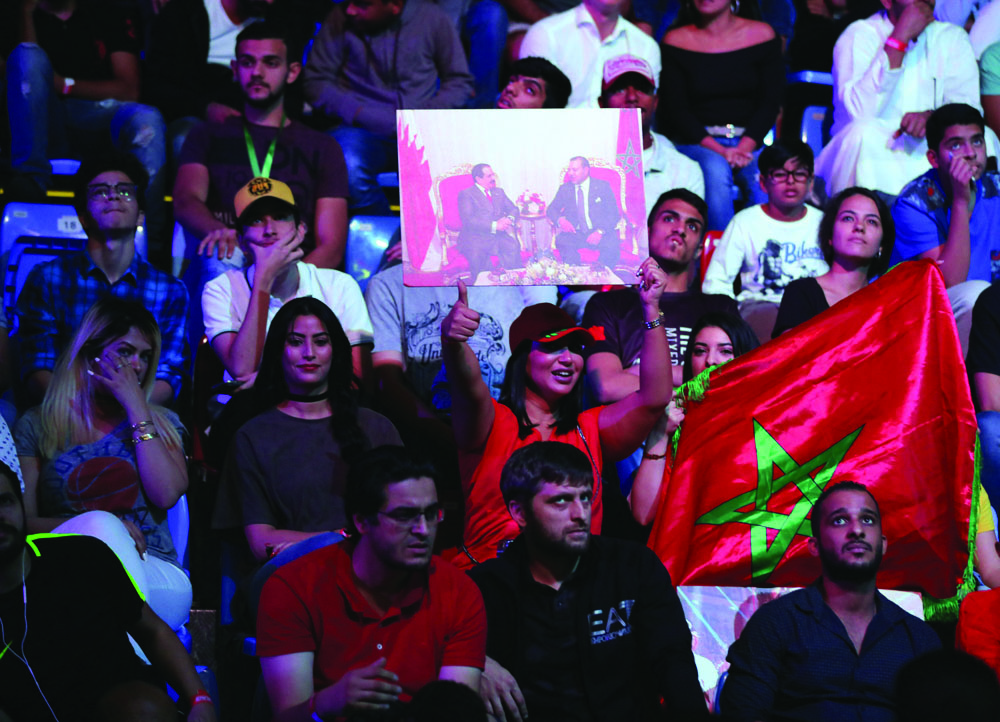 Felipe Efrain from Brazil fought against Nawras Abzakh of Jordan in the next fight in the Bantamweight division. Efrain’s striking was no match to Abzakh. To his credit Abzakh was able to stand up and continue for over 3 minutes, showing amazing resilience considering the damage taken. However, a flying knee followed by punches was enough to knock out Abzakh and clinch victory in the first round. 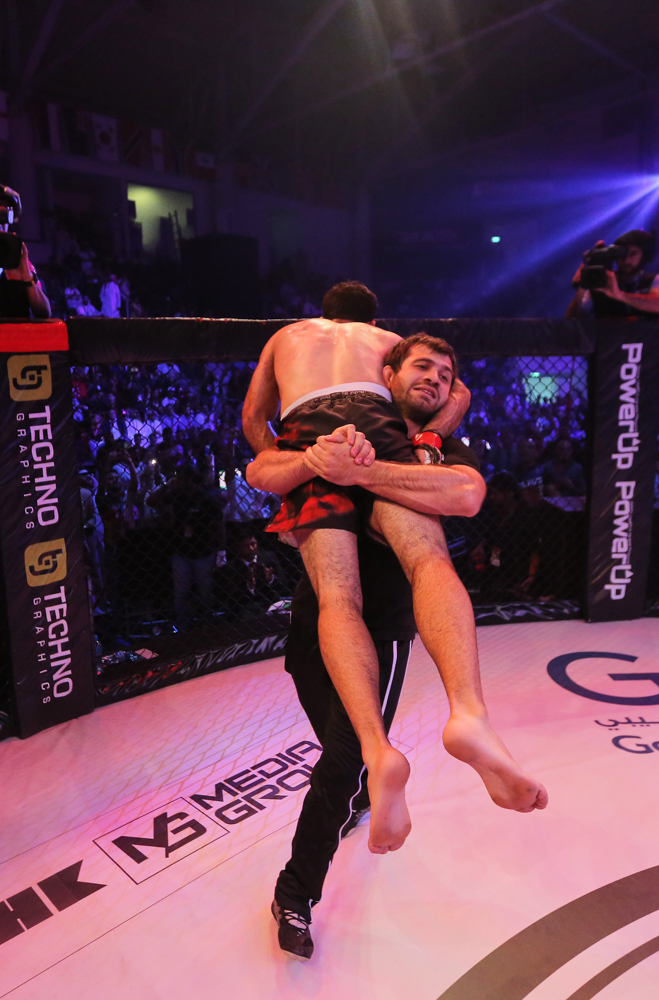 The ninth bout of the night was the most-anticipated between Bahrain’s MMA Champion Hamza Kooheji and Indian fighter Mohammed Farhad.

Both fighters showed a great performance, exchanging a couple of blows and kicks. However, Kooheji dominated the match, especially the few last minutes, when his good stamina paid off. Kooheji was announced the winner of the fight by unanimous decision.

The arena echoed with the chants of the crowd in support of the “Pride of Bahrain”, Kooheji, who dedicated the victory to HH Shaikh Khalid and the people of Bahrain.

“We’re KHK MMA. HH Shaikh Khalid is taking good care of us. We become better every day, and you will say how Bahrainis will take over the MMA sport,” Kooheji commented. 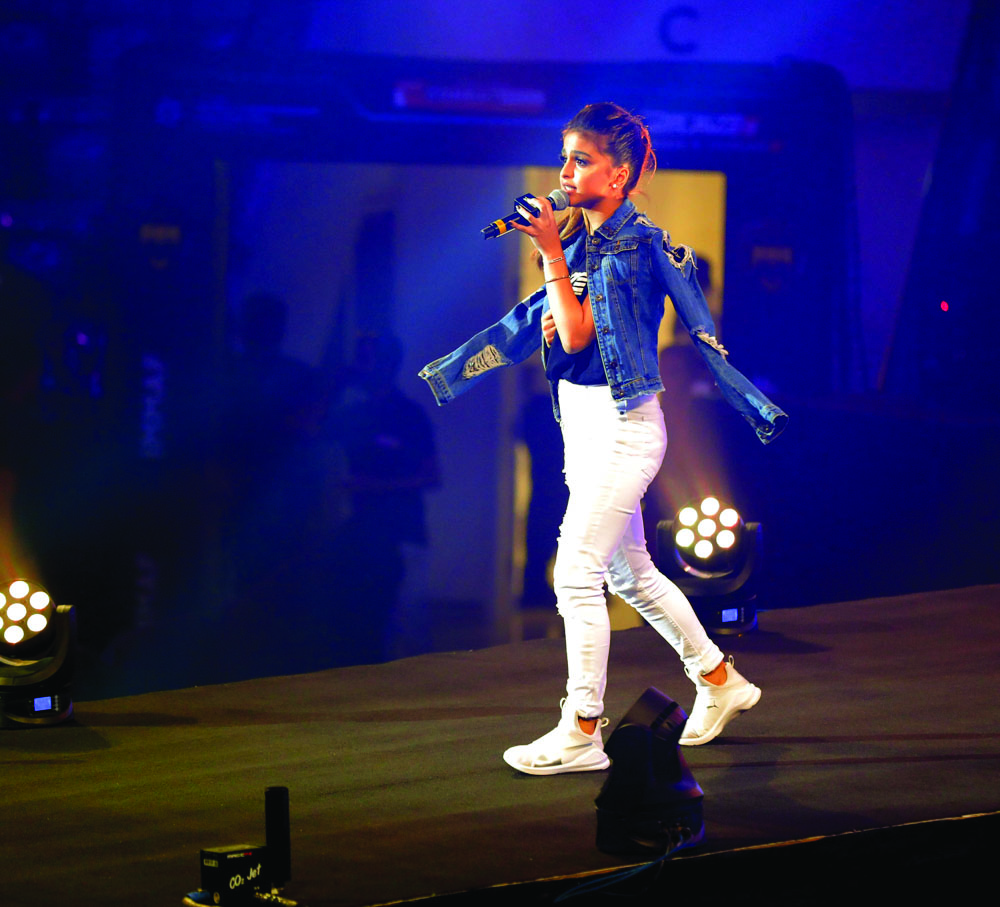 Lebanese Mohammad Fakhreddine won the tenth fight against his Kuwaiti rival Tahar Hadbi due to an unintentional banned blow.

Hadbi involuntarily kicked Fakhreddine in the area under the belt, pushing the referees to immediately end the fight and announce the Lebanese fighter as the winner of the match. 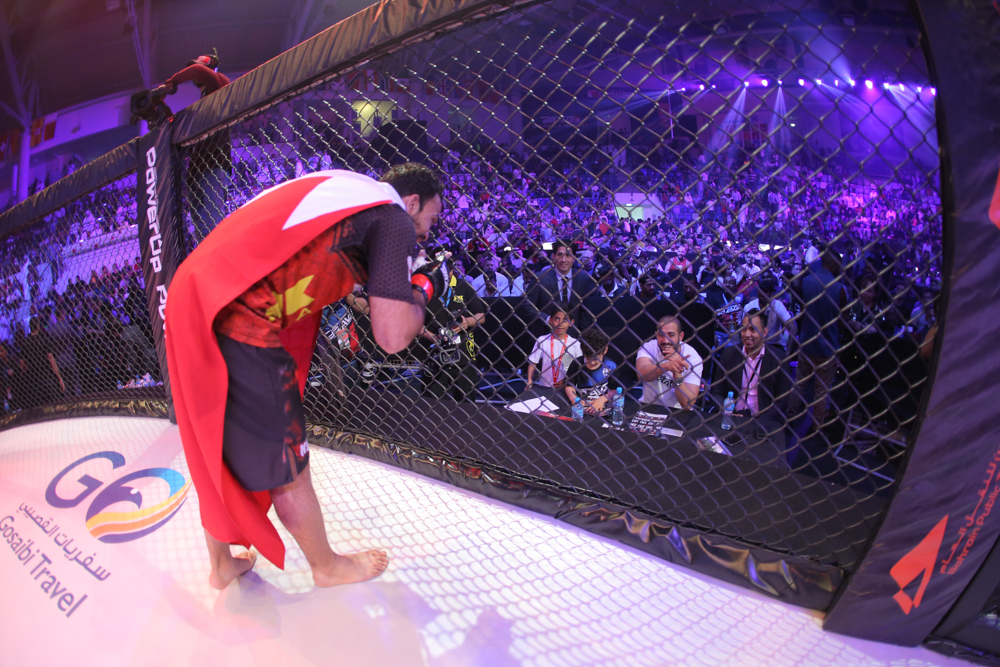 The eleventh bout witnessed immense excitement as it included two of the most vicious fighters in the championship, Palestinian Abdulkareem Al Selwady and Brazillian Erick De Silva.

Al Selwady has been participating in Brave events ever since the first edition. The 22-year-old thanked HH Shaikh Khalid for sponsoring MMA sports in the region and worldwide, and promised to show more surprises in his coming fights. 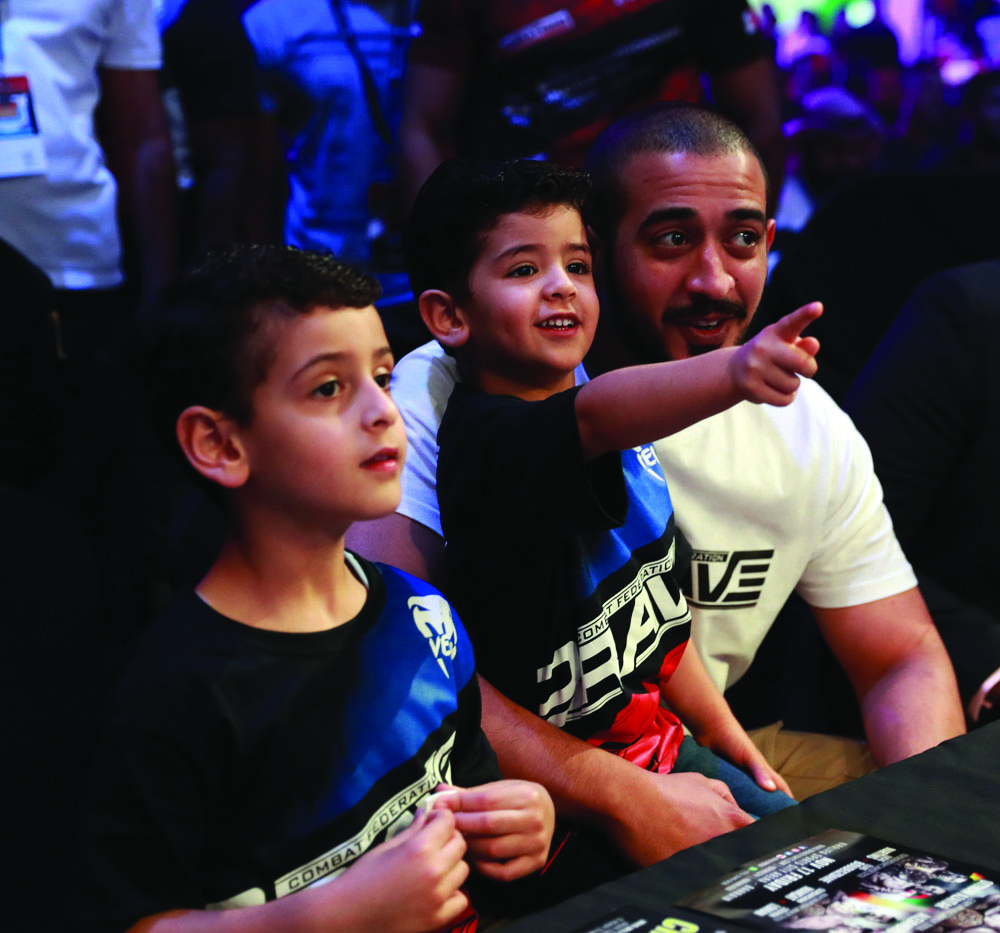 In the next fight, also in the lightweight, German Alan Omer won his Brazilian contender Gesias Cavalcante by knockout in the third and final round.

Both fighters played in similar strength and predicting the winner of the bout was a tough decision.

It was until few minutes into the final round that Omer went all out on his opponent, throwing several strong punches straight to Cavalcante’s head until the referee decided to end the fight. 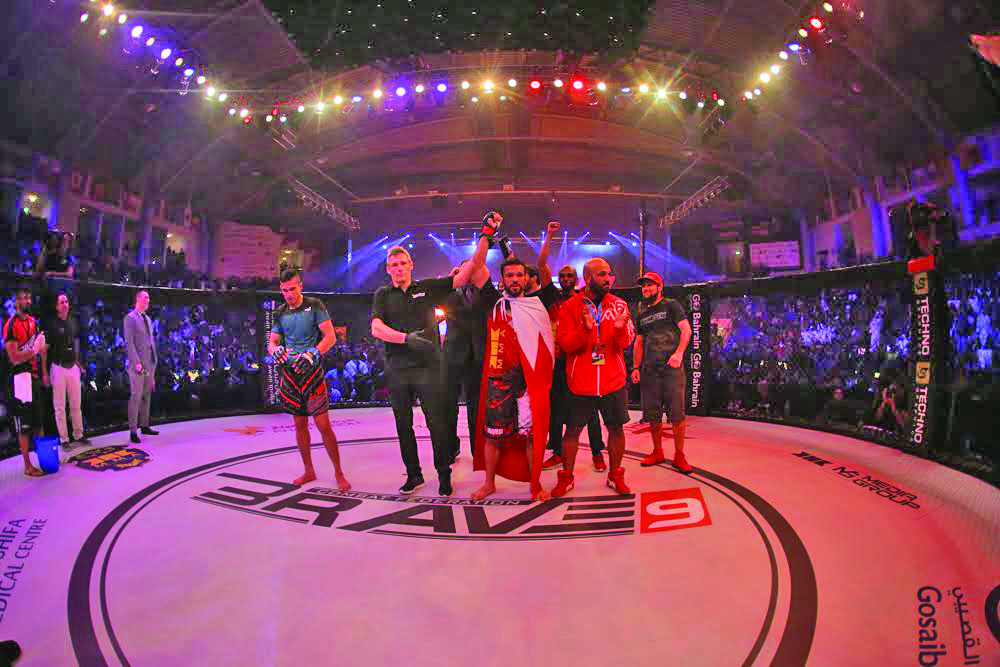 The thirteenth fight of the night was between two former Brave Champions, Jordanian Jarrah Al Selawe and British Carl Booth.

Both fighters lasted throughout the fifteen-minute match. But, the Jordanian clearly dominated the three rounds of the match, eventually winning the fight by unanimous decision. 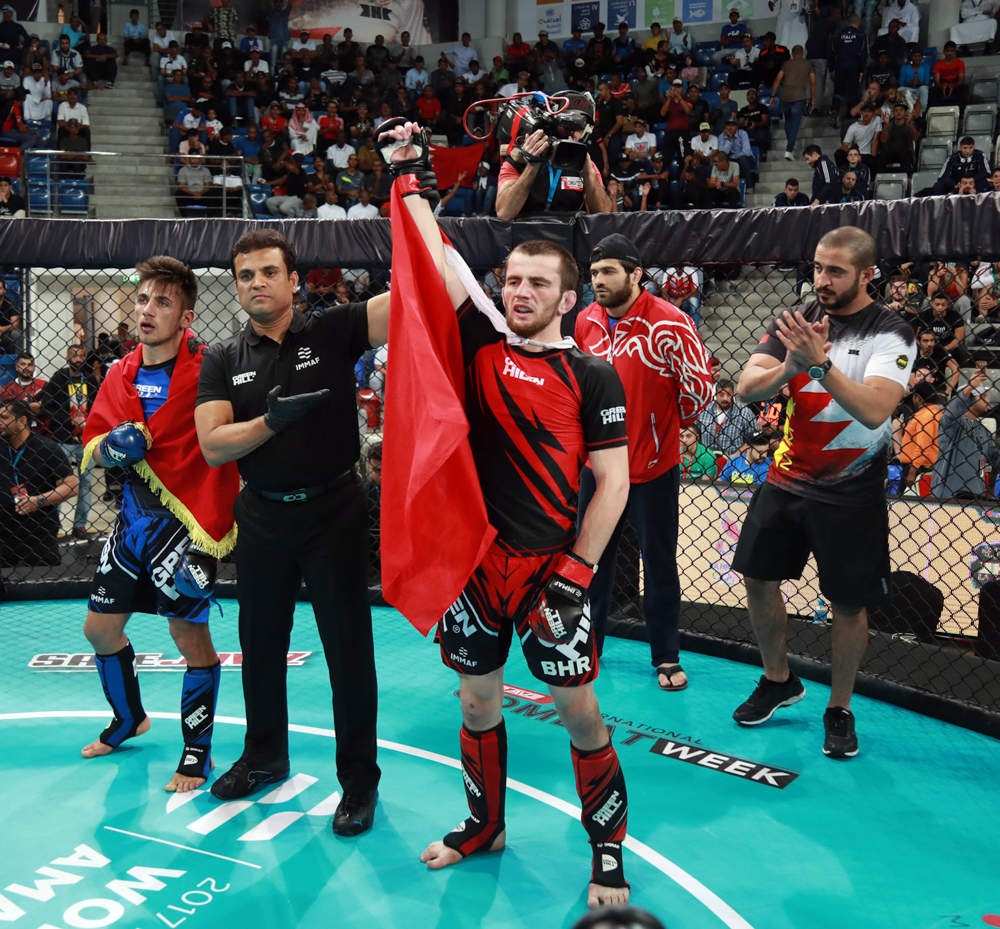 The first of the two main matches of the night was between Gurdarshan Mangat from India and Stephen Loman from the Philippines.

Both athletes fought for the Brave World Bantamweight Title. The match ended in the first round by a marvelous knockout by Loman, who took Mangat by surprise and punched him twice in head knocking him to the ground.

Mangat thanked HH Shaikh Khalid and the Filipino fans at the arena for their support. 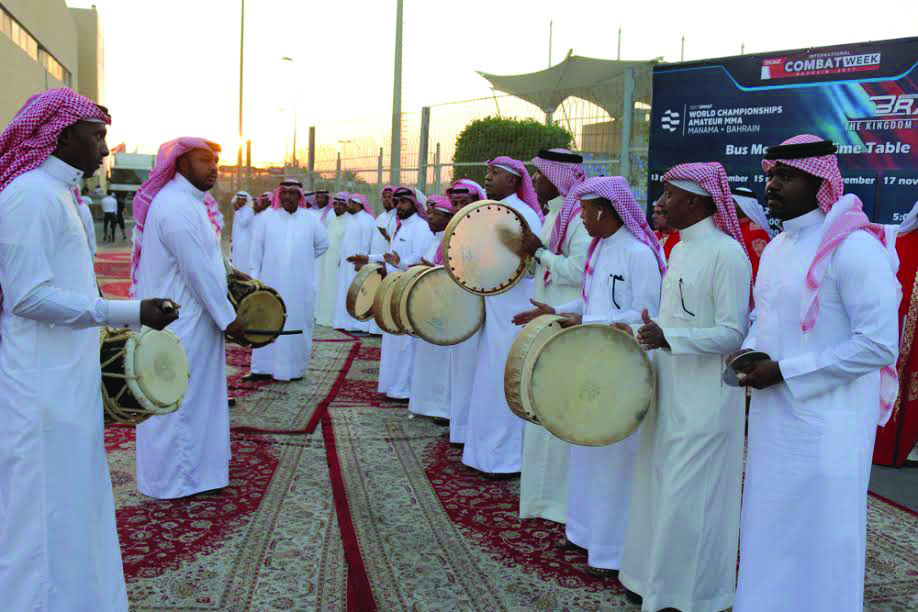 The most powerful bout and the final match of the night was between Moroccan Ottman “The Bulldozer” Azaitar and Mexican Alejandro Martinez, fighting for Brave Lightweight World Title.

Both fighters showed equal performances, exchanging domination of the fight. Martinez missed a couple of chances to take his opponent out, as Azzaitar fell down few times. However, the “Bulldozer” took full grip of the final round. He delivered a powerful kick to Martinez’s thigh by the second half of the round, forcing him to surrender.

HH Shaikh Khalid awarded the championship belt to Azzaitar by the end of the match in a remarkable ceremony.

A show you don’t want to miss