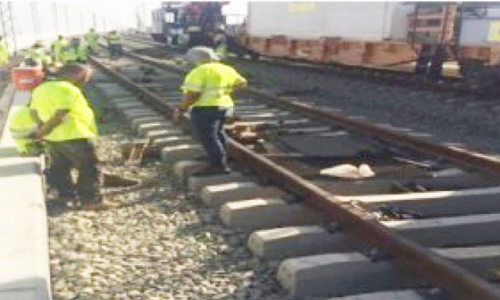 Jeddah : An expatriate worker was killed and four others injured in an accident at a work site of the Haramain Train project on Monday, Al-Madina newspaper reported.

A source from the Saudi Railways Organization said two construction vehicles belonging to one the project’s contractors collided at the work site. “The accident resulted in the death of a worker while four others were injured,” said the source.

Haramain Train Project Manager Bassam Ghulman said the workers were installing 250-meter-long rails on the railway bridge across Palestine Road in Jeddah with the help of special construction vehicles when the accident took place.

“The workers had completed the installation of the steel bars and the construction vehicle was reversing to return to the base when it hit another vehicle,” said Ghulman.

“There were a group of workers standing at the rear of the vehicle, which was 300 meters long, in violation of safety regulations. The construction materials on the vehicle were not secured properly as they are meant to be lifted soon,” said Ghulman.

“There were five workers at the rear of the vehicle and all of them fell as they lost balance on impact. One of the workers, a Sri Lankan, hit his head on the concrete and died as a result. Four other workers sustained multiple injuries,” said Ghulman.

He added the injured workers were taken to hospital, but two of them were discharged after necessary treatment. Two others, both of them Indians, were still recovering in hospital, Ghulman said.