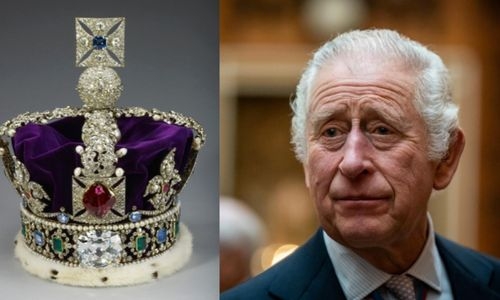 The historic St Edward's Crown, which has been the centrepiece of the coronation of monarchs in England for more than 350 years, has been removed from the Tower of London to be modified for the coronation of King Charles III next May, Buckingham Palace said.

The crown, which usually forms part of the Crown Jewels on display at the Tower, has been used since the coronation of King Charles II in 1661 after the monarchy was restored following the 10-year republic of Oliver Cromwell.

The St Edward's Crown replaced a medieval version, thought to have dated back to the 11th Century reign of Edward the Confessor which was melted down in 1649.

Charles III will be crowned with St Edward's Crown during the solemn ceremony to be held at London's Westminster Abbey on May 6, just as his late mother Queen Elizabeth II was in 1953. He will also wear the Imperial State Crown during the service.

The St Edward's Crown, made up of a solid gold frame set with rubies, amethysts, sapphires, garnet, topazes and tourmalines, follows its original medieval forebear in having four crosses-pattée and four fleurs-de-lis. It also has a velvet cap with an ermine band.