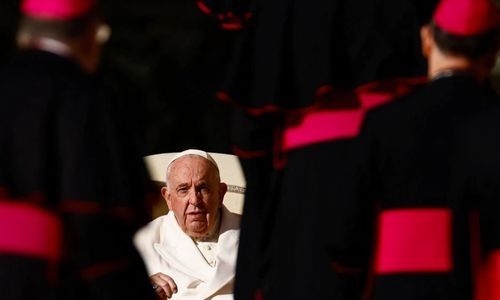 Pope Francis said on Wednesday that Ukrainians were suffering today from the "martyrdom of aggression" and compared Russia's war in Ukraine to the "terrible genocide" of the 1930s, when Soviet leader Josef Stalin inflicted famine on the country.

Francis, speaking to thousands of people in St. Peter's Square in his weekly general audience, mentioned the "Holodomor", or death by starvation, in which millions of Ukrainians died.

"This Saturday marks the anniversary of the terrible genocide of the Holodomor, the extermination by famine of 1932-33 that was artificially caused by Stalin," he said.

"Let us pray for the victims of this genocide and let us pray for so many Ukrainians - children, women, elderly - who are today suffering the martyrdom of aggression," he said.

For hundreds of years, the Ukrainian language and any expression of Ukrainian culture and independent identity were quashed, first under the Russian Empire of the tsars and later by the Soviets.

The Holodomor was a result of Stalin's efforts to collectivise agriculture and root out Ukraine's fledgling nationalist movement.

Since Russia invaded its neighbour in February, Francis has mentioned Ukraine in nearly all his public appearances and has warned several times that the crisis risks triggering the use of nuclear weapons, with uncontrollable global consequences.

Last month the pope for the first time directly begged Russian President Vladimir Putin to stop the "spiral of violence and death" in Ukraine.