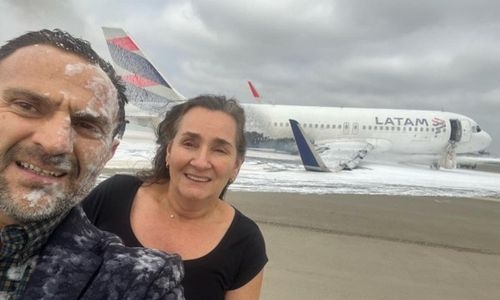 Over the weekend, a LATAM Airlines plane taking off from the airport in Peru's capital Lima caught fire when it struck a fire truck on the runway.

Thankfully, all the 120 passengers aboard along with the airline crew survived the disastrous accident.

However, the crash claimed the lives of two firefighters, who were there on the runway.

Moments after the tragedy, one lucky couple, that managed to escape the plane without suffering any injuries, celebrated their survival by posting a selfie with the damaged aircraft.

Enrique Varsi-Rospigliosi, who is believed to be the man in the photo, along with his wife took a selfie after they managed to exit the plane.

In the photo, they are seen smiling while covered in a white, chalky fire suppressant chemical, clearly relieved that they survived the accident.

Behind them, the LATAM aircraft can be seen partially burned and tilted onto its right-hand wing, which is on the ground. The image was captioned as: "When life gives you a second chance."

A Facebook page A320 Systems also shared the photo with the caption: "Selfie of the year. Glad they are okay".

The picture has gone crazy viral online, with people celebrating their survival, while others criticised the couple for documenting the tragedy, which claimed two lives.

One user wrote, "I find it so bizarre, in a neutral way, that people take selfies after surviving tragedies.

I probably would do the same, feel the urge to document the experience. And the rest of us get to peek into such situations thanks to these pictures.

It gives me such a weird feeling.'' Another wrote, "'In those moments of tragedy, those who leave their lives just want to share the miracle of...Living!' one person wrote under the selfie.

Calling the selfie in bad taste, a third wrote, "What idiots ! 2 dead firefighters and these clowns are taking selfies at a crash."

A fourth said, "I think it was rude of them or maybe they are not aware of what exactly happened.''

According to Reuters, the incident took place at Jorge Chavez International Airport in Lima on Friday.

In one of the clips, the passenger plane can be seen colliding with the fire engine coming from the opposite side as it careened down the runway.

In another video, the plane is seen catching fire and releasing thick black smoke.

The cause of the crash was not immediately clear, but Jorge Chavez International Airport said they were "conducting all the necessary investigations".

"We are shocked": Walmart reacts after several killed in US store shooting