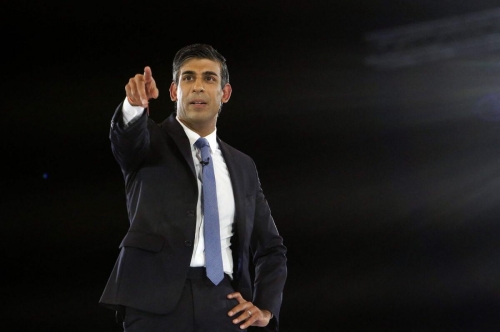 Britain's next Prime Minister — former finance chief Rishi Sunak — inherits a UK economy that had been headed for recession, even before the recent turmoil triggered by Liz Truss.

This caused the government to U-turn on most of its budget, including scaling back a cap on soaring energy bills that have contributed heavily to a cost-of-living crisis for tens of millions of Britons.

On Monday, data showed Britain's economic downturn had worsened in October, with private-sector output at a 21-month low.

"The heightened political and economic uncertainty has caused business activity to fall at a rate not seen since the global financial crisis in 2009, if pandemic lockdown months are excluded."

A figure under 50 indicates a contraction.

The UK is not alone, however, with separate S&P data pointing to an "impending recession" in Germany, Europe's biggest economy.

Truss resigned last Thursday, after just 44 days as prime minister. She had succeeded Boris Johnson on September 6 after a weeks-long campaign against Tory rival Sunak.

The former chancellor of the exchequer had warned in the battle to succeed Johnson that the tax cuts promised by Truss — when government debt had already soared on Covid interventions — was the wrong policy to pursue.

He was proved right, as the budget sent the pound crashing to a record-low close to parity with the dollar, and triggered yields on government bonds to soar.

With Sunak seen as bringing stability to markets, the sterling rose and yields fell on Monday.

"Investors clearly hope Sunak will stabilise the economy and the political situation — though it's hard to work out at this point which is the harder task," said AJ Bell financial analyst Danni Hewson.

"As well as the recovery in sterling and the reduced cost of government borrowing [as yields drop], Sunak will be pleased to see European gas prices [falling]."

However, with UK inflation at a 40-year high above 10 per cent, the Bank of England is set to unveil another bumper interest-rate hike at a regular policy meeting next week.

This will heap further pressure on borrowers, including homeowners who have seen mortgage rates surge in the wake of the government's costly budget.

"The political and economic uncertainty of the past few months has been hugely damaging to British business confidence and must now come to an end," she said in a statement, after Sunak's new position was confirmed.

"The new prime minister must be a steady hand on the tiller to see the economy through the challenging conditions ahead. This means setting out fully-costed plans to deal with the big issues facing businesses: soaring energy bills, labour shortages, spiralling inflation, and climbing interest rates."

WhatsApp is back after almost two hour-long disruption, longest outage of the year 2022