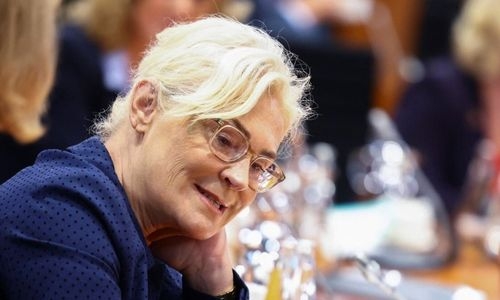 Germany's Defence Minister Christine Lambrecht made a surprise visit to Ukraine on Saturday, her first since Russia's attack in February as Kyiv urges Berlin to send it battle tanks.

Lambrecht visited the southern port city of Odessa, the German defence ministry said in a statement, without saying how long the trip had lasted. It added on Twitter that she had met her Ukrainian counterpart Oleksii Reznikov.

Ukraine has repeatedly sought Leopard battle tanks from Germany to aid in its counter-attack against Russia, but Chancellor Olaf Scholz's government has so far refused.

Scholz has said he doesn't want to go it alone on arms supplies and will only take decisions in consultation with his Western allies.

Berlin has instead struck deals with third countries, which transfer heavy weapons to Ukraine - in exchange for receiving supplies from Germany.

Lambrecht's visit came a day after Russian President Vladimir Putin declared the annexation of the Ukrainian regions of Donetsk, Lugansk, Zaporizhzhia and Kherson.

These annexations have been unanimously condemned by Ukraine's allies. "Germany will never recognise the results of the sham referendums" in the four regions, Scholz told Ukrainian President Volodymyr Zelensky by phone on Wednesday, according to the chancellor's spokesman Steffen Hebestreit.