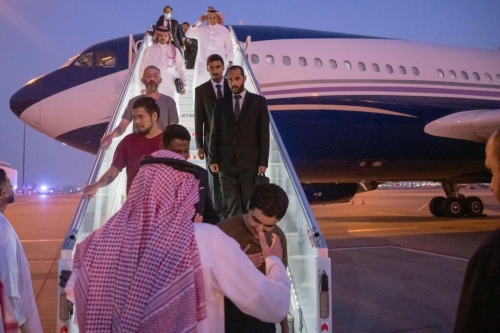 The list includes American, British, Croatian, Moroccan and Swedish nationals, the ministry said in a statement, adding that a plane carrying the prisoners landed in the kingdom.

"The relevant Saudi authorities received and transferred them from Russia to the kingdom and are facilitating procedures for their respective countries," the statement said.

The ministry did not identify the prisoners. A Saudi official said they were five Britons, two Americans, a Croatian, a Morrocan and a Swedish national.

Reuters could not immediately establish if the released group included Britons Aiden Aslin and Shaun Pinner and Morocco-born Brahim Saadoun who were captured earlier this year.

Both Ukrainian and Russian forces have captured hundreds of enemy fighters since the start of the conflict, with a handful of prisoner exchanges having taken place.

The head of the UN human rights mission in Ukraine said earlier this month that Russia was not allowing access to prisoners of war, adding that the UN had evidence that some had been subject to torture and ill-treatment which could amount to war crimes.