Unlike other former UK PMs, Johnson might take another shot at power | THE DAILY TRIBUNE | KINGDOM OF BAHRAIN 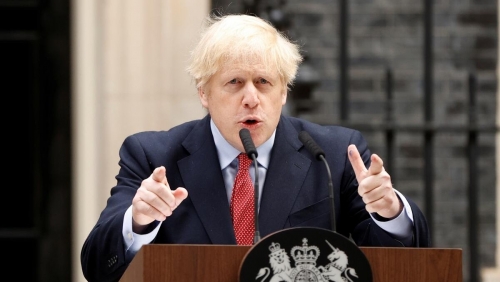 One day you have all the powers of a prime minister; the next day it’s all gone, including the house with the famous No 10 door. Boris Johnson will leave office on September 5, when the winner of the ongoing election for the next Conservative leader will be announced and will take over as the next prime minister. Johnson will join an exclusive club of living former prime ministers: Theresa May, David Cameron, Gordon Brown, Tony Blair and John Major. Leaving the top job is a wrenching emotional moment by any reckoning – May was in tears delivering her last speech as prime minister in July 2019 – but freed from the strains and stresses of office, members of the club have made creative uses of their time.

The transition to normality after leaving office can be tough. Gone are the staff, trappings of office and the use of Chequers, the prime minister’s country residence in Buckinghamshire. Former prime ministers get security and the use of an official car. May reached out to Cameron, Blair and Brown to discuss life after Downing Street. As Brown once put it, “you're very tired so you sleep for a bit…It's pretty dramatic. In Britain, when you go, you not only lose the title, but you lose the house overnight and any ability to present yourself as something.”

There is already talk in Westminster about the role Johnson will take on. There is always his former calling to go back to, journalism, where he was one of the highest paid columnists for The Daily Telegraph: his annual salary was reported to be £275,000. The latest buzz is that the mass circulation Daily Mail has approached him to write columns after leaving office. Johnson continued his close links with influential journalists while in office, such as Paul Dacre of Daily Mail. He is also expected to sign major deals to write a book or books, which is one of the favourite activities of former prime ministers, such as Winston Churchill (A History of the English-Speaking Peoples, 4 volumes, 1956-58), James Callaghan (Time and Chance, 1987), Blair (A Journey, 2011), ,Brown (My Life, Our Times, 2017) and Cameron (For the Record, 2019).

Besides salary as a Member of Parliament from Uxbridge and South Ruislip (over £84,000 a year) and severance pay, Johnson also stands to make as much as £5 million a year on the lucrative lecture circuit in Britain, United States and elsewhere (May reportedly earned more than £2.1 million on the circuit since July 2019). Former prime ministers continuing in the House of Commons as MPs is not unique, but awkward. Blair (2007) and Cameron (2016) also resigned as MPs primarily because they did not want to prove a distraction to their successors. But Brown continued as MP for five years, so did Major and Margaret Thatcher. May also continues as an MP, making some sharp interventions on Brexit and other issues.

Churchill, one of the most famous British prime ministers of the 20th century, remained as an MP for nine years after leaving Downing Street for the last time in 1955. He also focussed on creative pursuits, such as writing books, painting and travelling. In 2014, one of his paintings, The Goldfish Pool at Chartwell, which he painted in 1932, sold for almost £1.8 million at an auction. Since Major is known to be a cricket-lover, it is reasonable to say that the game has occupied much of his time out of office. As prime minister, he facilitated a cricket match during the 1991 Commonwealth Heads of Government meeting in Harare. He ended his last speech in May 1997 with this: “I hope you will forgive me if I say no more this morning. I believe, as you know, I have an appointment with Her Majesty the Queen in a few moments to tender my resignation so that a new Government may then be formally appointed…The second reason I shall say no more now is that after that I hope that Norma and I will be able, with the children, to get to The Oval in time for lunch and for some cricket this afternoon”.

Johnson is fond of tennis, and goes for morning runs. He is also known for introducing bikes in public places during his time as the mayor of London; they are better known as ‘Boris bikes’ – he has the option of riding them after leaving office. The former prime ministers who remained backbench MPs largely opted to keep a low profile, not making another bid to be prime minister. But a big question remains whether Johnson is done with being prime minister or will he have another go at it. His continued presence in the House of Commons on the backbenches will be closely watched, so will his interventions when the next prime minister takes over. Johnson is reportedly keen on returning to Downing Street, firm in the belief that after delivering a large majority for the Conservative party in the 2019 election, he is best placed to do a repeat in 2024. So whoever takes over as the prime minister on September 5, Johnson, at 58, is unlikely to fade away. In office, he tested the limits of established conventions; out of office, he may make as much news as he did while in office. - The writer is a senior journalist based in London.