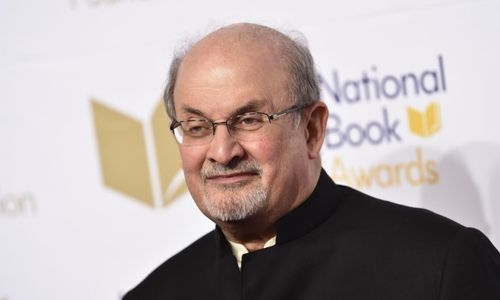 Salman Rushdie was taken off a ventilator and able to talk on Saturday, a day after he was stabbed as he prepared to give a lecture in upstate New York. Rushdie remained hospitalised with serious injuries, but fellow author Aatish Taseer tweeted in the evening that he was "off the ventilator and talking (and joking)." Rushdie's agent, Andrew Wylie, confirmed that information without offering further details.

Earlier in the day, the man accused of attacking him on Friday at the Chautauqua Institution, a nonprofit education and retreat centre, pleaded not guilty to attempted murder and assault charges in what a prosecutor called a "preplanned" crime.

An attorney for Hadi Matar entered the plea on his behalf during an arraignment in western New York. The suspect appeared in court wearing a black-and-white jumpsuit and a white face mask, with his hands cuffed in front of him.

A judge ordered him held without bail after District Attorney Jason Schmidt told her Matar, 24, took steps to purposely put himself in position to harm Rushdie, getting an advance pass to the event where the author was speaking and arriving a day early bearing a fake ID.

"This was a targeted, unprovoked, preplanned attack on Mr Rushdie," Schmidt said. Public defender Nathaniel Barone complained that authorities had taken too long to get Matar in front of a judge while leaving him "hooked up to a bench at the state police barracks".

"He has that constitutional right of presumed innocence," Barone added. Rushdie, 75, suffered a damaged liver and severed nerves in an arm and an eye, Wylie said on Friday evening. He was likely to lose the injured eye.

US President Joe Biden said on Saturday in a statement that he and first lady Jill Biden were "shocked and saddened" by the attack. Investigators were working to determine whether the suspect, born a decade after "The Satanic Verses" was published, acted alone.

Barone, the public defender, said after the hearing that Matar has been communicating openly with him and that he would spend the coming weeks trying to learn about his client, including whether he has psychological or addiction issues.