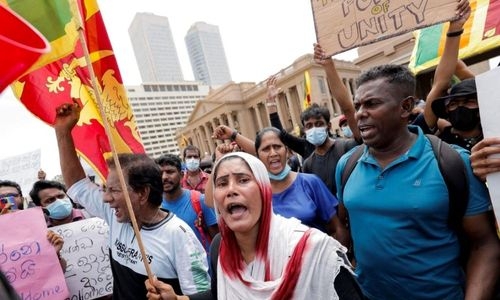 Anti-government protesters in Sri Lanka on Sunday continued to occupy the residences of President Gotabaya Rajapaksa and Prime Minister Wickremesinghe. This comes a day after they stormed into the premises and set on fire one of the buildings over the nation's severe economic crisis, even as the island nation is still in the dark about the embattled President's whereabouts.

Rajapaksa's only communication outside since the protesters stormed into the city has been with Parliament Speaker Mahinda Yapa Abeywardena, who announced late Saturday night that the President would resign on Wednesday.

President Rajapaksa informed the Speaker about this decision to quit after Abeywardena wrote to him seeking his resignation following the all-party meeting of leaders held Saturday evening.

The Speaker would become the acting President in the absence of both the President and the Prime Minister. Later, an election among MPs must happen to elect a new President. Prime Minister Wickremesinghe has also offered to resign.

Prime Minister Wickremesinghe, whose private house suffered an extensive arson attack last night, remains in position despite calls to quit. In a statement Saturday night, Wickremesinghe, who has expressed his willingness to resign, said, "This country is gripped with fuel and food shortages. There will be an important visit scheduled by the WFP next week, while crucial talks have to be continued with the IMF. So if the current government is to quit, it must be replaced by the next."

Speaker Abeywardena had asked President Rajapaksa and Prime Minister Wickremesinghe to resign immediately to make way for an all-party government after the country witnessed its biggest protest yet amid an unprecedented economic crisis.

The IMF on Sunday said that it was closely monitoring the ongoing developments in Sri Lanka and hoped that the political crisis would be resolved soon to allow for the resumption of dialogue on an IMF-supported programme in the cash-starved country.

The chief of defence staff General Shavendra Silva appealed for calm. He said that an opportunity to resolve the current political crisis peacefully is now available and said the public must assist the security forces to maintain peace and stability.

Meanwhile, the Colombo national hospital said 102 people had been admitted with injuries. Among them are 11 media personnel. The police's special task force was accused of brutally assaulting two television journalists at the protest at the Prime Minister's private residence. The attack triggered the backlash which resulted in protesters setting the house on fire.

The main Opposition SJB said their constituent parties are to meet this morning to take stock of the political situation. At least four Cabinet ministers offered their resignations. Agriculture Minister Mahinda Amaraweera said he would be quitting when he ceremonially received the stock of fertiliser due on Sunday from India.

"I will resign today after receiving the 40,000 MT of urea which we have received under the Indian credit line yesterday," Amaraweera told reporters.