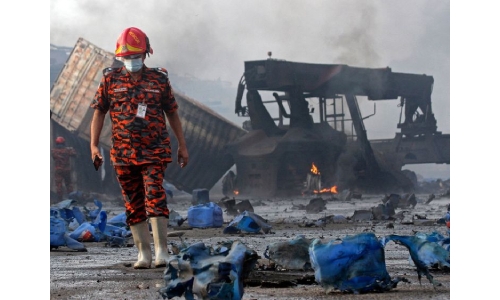 The death toll from a huge ongoing fire at a shipping container depot in Bangladesh hit 25 on Sunday and was expected to rise further, a senior health official said.

“Twenty-five people have died in the fire including five firefighters. The death toll is expected to increase as the fire is still not totally under control,” health department director Hasan Shahriar told AFP.

The fire broke out shortly before midnight at a container storage facility in Sitakunda, about 40 kilometres from the key port of Chittagong, fire service official Jalal Ahmed said.

“Sixteen people have been killed in the fire. The number of fatalities is expected to rise as some of the injured are in critical condition,” Chittagong’s chief doctor, Elias Chowdhury, told AFP.

Multiple firefighting units were at the scene attempting to douse the blaze when a massive explosion rocked the site, injuring scores of people, including firefighters, Abul Kalam Azad, the local police chief, told AFP.

“Some 170 people were injured including at least 40 firefighters and 10 police officers. Three firefighters were also killed,” he said.

Chowdhury said the injured had been rushed to different hospitals in the region as doctors were brought back from holiday to help in the emergency.

He said the number of fatalities could still grow as some 20 people remained in critical condition with burns covering 60 to 90 per cent of their bodies.

Local media put the number of injuries at about 300, and requests for blood donations for the injured flooded social media.

Emergency crews were still working to put out the fire Sunday morning and military clinics were helping to treat the injured.

Mominur Rahman, the chief administrator of the Chittagong district, said while the fire was largely under control, there were “still several pockets of fire in the depot”.

“Firefighters are trying to control these pocket fires,” he said.

Rahman said the depot contained millions of dollars of garment products waiting to be exported to Western retailers, for whom Bangladesh is a key supplier.

Ruhul Amin Sikder, the spokesman for the Bangladesh Inland Container Association (BICA), said some of the containers at the 30-acre private depot contained chemicals, including hydrogen peroxide.

The director of the BM Container Depot, Mujibur Rahman, said the fire’s cause was still unknown. He added the facility employs about 600 people.

In 2020, three workers were killed after an oil tank exploded in another container depot in the neighbouring Patenga area.

Fires are common in Bangladesh due to the lax enforcement of safety rules. In July 2021, 54 people died when a blaze ripped through a massive food-processing factory outside the capital Dhaka.

In 2020, 70 people were killed when another fire engulfed several Dhaka apartment blocks.