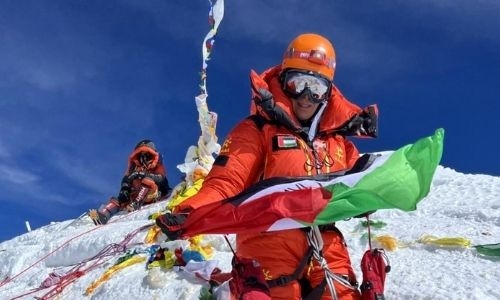 Prior to this, Albaloushi has successfully scaled smaller peaks including Turkey’s Mount Ararat, which reaches 5,140 metres while Mountain Everest sits 8,848 metres above the sea level.

“I decided to go to Nepal and scale Mount Everest in January. I spoke with the operator and was asked if I'm able to do it. After a few medical questions related to my health and how my body reacts to high altitudes, they said it is possible as I was physically fit to take on the mission,” she told Khaleej Times in an interview.

Nayla reached Nepal on April 16 to achieve her dream of scaling the world’s tallest peak.

“Everyone there told me that you’re very late because most of the people who had to go to the peak were there at the base camp around 10 days before me. Therefore, I didn’t get time also to acclimatise. Before setting off for the expedition, I didn’t disclose it to anyone except my parents and siblings. They supported me well and were praying for me. I was constantly talking to them during the expedition,” she said.

In 2011, Saeed Al Memari made history and became the first Emirati man to reach the peak of Mount Everest. The Emirati mountaineer revealed that she had not taken any special training prior to embarking on this mission. But being a fitness enthusiast, Nayla maintains a healthy lifestyle, which is important for such tough tasks.

“I do exercise regularly to keep myself fit and that helped me a lot to achieve my goal,” she said, adding that people who are keen to scale the world’s top peaks should have the passion and strong will to achieve their goal.

Nayla said the weather was really nice during her expedition which helped to achieve the feat in one go without going up down to the basecamp. “Praise the Lord, I did not face any kind of difficulties. Everything was very smooth. The weather was amazing. We began our journey at night around 10pm when the weather was calm and normal. The wind was blowing just like we feel at Jebel Jais. It was not windy at all.”

She advised Emirati women to pursue their dreams and goals and don’t give too much negative thought to their targets.

“Just focus on your goal and you’ll achieve it.”