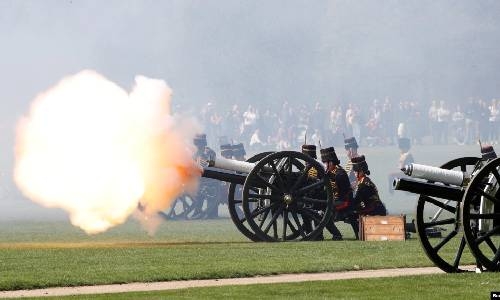 Queen Elizabeth celebrated her 96th birthday at her Sandringham estate yesterday as gun salutes rang out across London and Windsor and military bands played "Happy Birthday".

Britain's longest-serving monarch, who celebrates a historic platinum jubilee this year, was pictured with two white ponies in a photo released for the occasion.

Government ministers joined members of the royal family in sending their best wishes to the queen, who has stepped back from most public duties this year over concerns about her health.

She has travelled from Windsor Castle, west of London, to spend her birthday at her estate in Sandringham, Norfolk.

"An inspiration to so many across the UK, the Commonwealth and the world, it's particularly special to be celebrating in this Platinum Jubilee year," her grandson Prince William and his wife Kate said on Twitter. Prime Minister Boris Johnson, who is visiting India, wished the queen a happy birthday and paid a "heartfelt tribute" to her "70 years of dedicated and faultless service to our country and the Commonwealth" in a video message.

Toymaker Mattel launched a commemorative Barbie doll of the queen dressed in an ivory gown with a blue sash and wearing her wedding tiara to mark the jubilee.