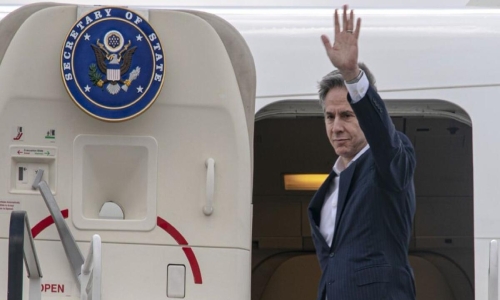 US Secretary of State Antony Blinken kicks off a Middle East trip on Sunday in Israel, where he will take part in a rare Arab-Israeli summit and hold talks with regional partners on stalled Iran nuclear talks and Russia’s invasion of Ukraine.

Blinken will meet with Israeli Prime Minister Naftali Bennett and Foreign Minister Yair Lapid on the first leg of the Middle East and North Africa trip lasting until March 30.

Topping the agenda are the Iran nuclear talks, about which Israel and Gulf Arab states have voiced strong misgivings, and Russia’s month-long operation on Ukraine, a conflict in which Israel has emerged as a potential mediator.

The nuclear talks had been close to an agreement several weeks ago until Russia made last-minute demands of the United States, insisting that sanctions imposed on Moscow over its attack on Ukraine should not affect its trade with Iran.

Lapid will host Blinken and their counterparts from the United Arab Emirates, Bahrain and Morocco at an Israeli desert retreat to discuss how to improve cooperation. The three Arab nations have been part of the so-called Abraham Accords, agreements brokered by the Trump administration in 2020 to normalise ties with Israel.

Egypt’s foreign minister, whose country on Saturday marked 43 years of peace with Israel, will also join the summit.

The venue for the foreign ministers’ meeting is Sde Boker. The remote Negev desert farm collective has long been a symbol of Israeli innovation.

Blinken is set to visit the West Bank, Morocco and Algeria. He will meet with Palestinian President Mahmoud Abbas in Ramallah, the State Department said in a statement.