Indian Prime Minister Narendra Modi on 5-day visit to US: What's all on agenda | THE DAILY TRIBUNE | KINGDOM OF BAHRAIN 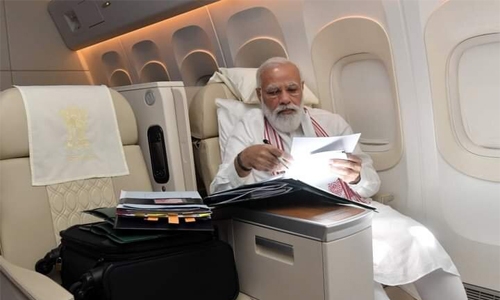 Prime Minister Narendra Modi is set to embark on a five-day visit to the United State on Wednesday, his first foreign trip in nearly six months and second since the outbreak of the COVID-19 pandemic.

The Prime Minister will leave for the United States on Wednesday and will come back on Sunday, Foreign Secretary Harsh Vardhan Shringla said on Tuesday.

During his five-day visit, Prime Minister Modi is scheduled to hold a bilateral meeting with US President Joe Biden on September 24 at the White House.

This will be Prime Minister's first in-person meeting with Biden. The two leaders have virtually met for several multilateral meetings — the Quad summit in March, the climate change summit in April, and the G-7 meet in June this year.

In their in-person talks, the two leaders are expected to deliberate on ways to bolster bilateral ties in trade, investment and defence and security besides discussing developments in Afghanistan.

Shringla said the bilateral talks between PM Modi and President Biden are expected to figure ways to deal with radicalisation and terrorism besides major regional issues.

Besides holding bilateral talks with the US leaders, the Prime Minister will participate in the first in-person summit of the Quad in Washington on September 24 that is expected to broadly focus on contemporary global challenges, including the Afghan crisis, the COVID pandemic and ensuring a free and open Indo-Pacific.

The four-member grouping will exchange views on contemporary global issues such as critical and emerging technologies, connectivity and infrastructure, cyber security, maritime security, humanitarian assistance, disaster relief, climate change and education. The summit is expected to provide a valuable opportunity for dialogue and interactions among the Leaders, anchored in their shared vision of ensuring a free, open and inclusive Indo-Pacific region.

After concluding his engagements in Washington, PM Modi will travel to New York to attend the UN General Assembly on September 25.

The Prime Minister is scheduled to address the General Debate of the High-Level Segment of the 76th Session of the United Nations General Assembly (UNGA).