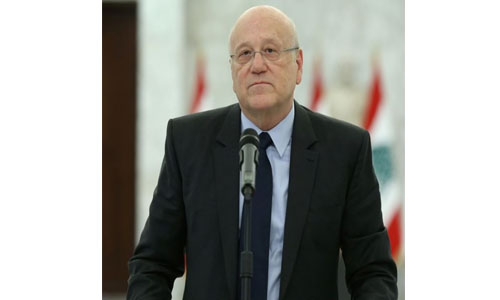 Mikati speaks after meeting with Aoun at the presidential palace in Baabda
world September 11, 2021

Finally, Lebanese leaders agreed to form a government after feuding for a year over cabinet seats, which pushed the already battered country to the verge of a devastating collapse.

The breakthrough followed interventions by France, which led the efforts to get the fractious leaders to agree on the cabinet seats and begin reforms stalled since last year’s catastrophic Beirut port explosion. Prime Minister Najib Mikati and President Michel Aoun signed a decree establishing the government in the presence of Nabih Berri, speaker of parliament, the presidency said.

The country hit a crunch point last month when fuel shortages brought much of the country to a standstill, triggering numerous security incidents, mounting concern in the West and warnings of worse to come unless action is taken.

Like the outgoing cabinet of Prime Minister Hassan Diab, the new one is expected to comprise ministers with technical expertise who are not prominent politicians but have been named by the main parties.

The heavily armed, Hezbollah, a political ally of Aoun, which is designated a terrorist group by the United States, is expected to have two of the 24 ministers, sources said.

Political sources said there had been intensive contacts through the night to try to reach an agreement. The crisis, which came to a head in late 2019, stems from decades of corruption in the state and unsustainable financing.

The steadily deteriorating situation worsened precipitously in August when the central bank announced it could no longer finance fuel imports at heavily subsidised exchange rates.